The roads here have one quality. They go up. Turn a corner and the road goes up (occasionally down too). But there is one place they don’t. The Mahoning Shadow Trail.

The MST is a 15-mile rail trail that follows the Mahoning Creek to the west and goes deep into the forest to the east. I wasn’t sure how much time I had to ride so I asked for recommendations from my Punxsutawney friends. The consensus was the cool things were to the west.

I parked at Punxy Phil’s (I would eat there too) and joined the trail at the west end of town (well, the west end of downtown). The trail is a crushed limestone trail but there were large stretches where it was barren of limestone. More like packed dirt which actually was OK.

The Mahoning Creek is a beautiful creek with lots of sections of what appears to be deep pools of water. And this was a logging creek 150 years ago as loggers could float their logs to Pittsburgh from here.

This became a coal mining area and one passes abandoned coke ovens in the hillside. They were used to burn coal into coke for iron furnaces.

I passed perhaps 12 other users on this section from Punxsutawney out to Valier (or Fordham). I made mental note of the best photo ops for the ride back into town.

Reaching Punxs’y I carefully noted the signs as I had read reviews which stated they were lacking. And I concur. I don’t know Punxs’y but I’m not a complete stranger either. I knew where the trail entered and exited the town and if I couldn’t follow a marked on-street trail I was OK navigating there by myself.

The signage is bad. Period. Entering Punxsutawney from the west I found myself on the levee next to Mahoning Creek. Or on a paved path. The path here is very narrow but on this cloudy and cool day, it was OK because I didn’t meet anyone coming from the other direction.

I lost the “scent” of the trail but headed back to where I knew it was. I found the skateboard park but turned around when I didn’t see a trailhead. I left, went back to the main road (East Mahoning Street), and decided I would ride the main road to Cloe. At Cloe, I could pick up the trail.

On the road, it’s a climb. A real climb. The roads here go up and go up some more. But I like to climb so I was OK with taking the highway. But once on East Mahoning Street, I saw a sign marked Bike Route and decided to take it. And I found a trailhead for the MST. And I still don’t know if it’s THE trailhead – but it worked.

This is also a trailhead /parking and a decision for me. Where does the trail go? I hadn’t studied a map to know and my gut said to turn left (on Rte 36) and I would find it in a couple hundred yards. At the stop sign in the lot there is a small blue arrow – straight.

What is this? Is this a directional sign for the MST? I didn’t know but it puts one on the Cloe-Rossiter Road and I was OK with riding to Rossiter and back on the highway and calling it a day.

I went a few hundred yards past Cloe Lumber and saw a sign to the left for the MST. I think. Or maybe it was just bike route. But I jumped on it and was now on the eastern portion of the MST.

No longer following a stream it did cross Canoe Creek. On a map I was next to Ugly Run but never saw it. I was in a deep forest. There is nothing here except trees. And more trees.

At the end I came to Winslow Road. I wanted to jump on the road for the ride back but wasn’t sure where it would take me. I decided to ride the trail back. And I would just ride. (And it was a good decision not to take the road.)

I followed the trail back to Cloe, crossed Rte 36 and decided to ride as far as I could in Punxs’y before the trail ended. I passed where I had entered and this time exited at the skate park. I also rode through the grass. For this rider, the trail is not well marked.

Once in town, I decided to take surface streets back to Punxy Phil’s. It was nice riding through town.

My short review of the trail is this. It lacks the railroad infrastructure of high trestles or tunnels some iconic trails have. But the MST can’t do anything about that. It also lacks facilities but you are never more than 7.5 miles from Punxsutawney where you should be able to find anything you need – water, food, restrooms. The signage is not good in town. But you will find peace and quiet and solitude riding out towards Winslow with a fast ride back. IMHO, it is prettier riding towards Valier simply because you are next to the Mahoning Creek most of the way.

It may not be a destination trail but definitely one you should ride if you are in Punxsutawney.

Equipment: I rode my Trek Checkpoint (Gravel bike) with 700×32 tires. There were no issues with tire size. 28s would have been fine and 25s would be too. 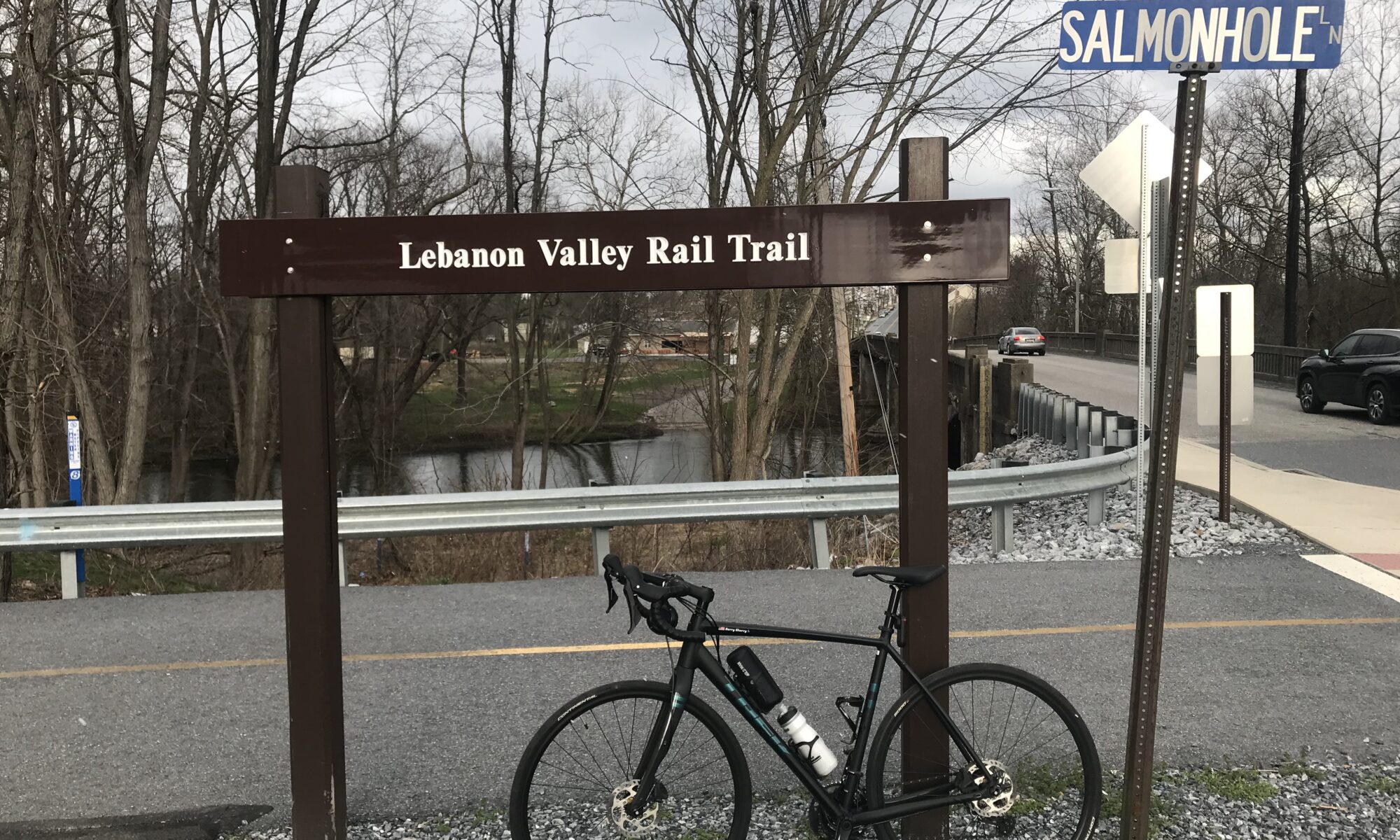 I was returning home from Allentown, Pennsylvania, and had not yet ridden today. With only a little research, too little, I came here looking for the Lebanon Valley Rail Trail. I didn’t have much luck.

The Lebanon Valley Rail Trail looks like a nice 18-mile trail but it isn’t here (mostly). According to TrailLink.com “Two short, isolated sections of trail totaling 3 miles have also been constructed north of the main segment. The first segment in Lebanon begins at Union Canal Tunnel Park, where parking and picnic benches are available, and extends north just less than 2 miles to Long Lane. The second segment begins in Bunker Hill near PA 72 and Swatara Creek and extends through Jonestown to US 22.“

So I came to Jonestown seeking a one-mile rail trail. That’s not quite a destination but it was on my way home.

It was cold. It was April. It was spring and it was only 43º. The windchill was 36º. There were snow flurries in the air.

I found the sign for the Lebanon Valley Rail Trail and parked in a small lot. I started down the trail and went 1.2 miles when it abruptly ended. And that was it. I went over to Ebenezer Road and took it back to Jonestown.

I rode through Jonestown looking for some nice streets. It’s a small town. I was leaving on Old U.S. 22 and turned back to town. I went to the large cemetery and found the gravesite of my great-great-great-great-great-grandparents, John William and Regina Kurtz. John (1732-1799) was a German Lutheran pastor and served the church well in Eastern Pennsylvania. He served the Zion Lutheran Church in town and I visited it as well.

I headed back to the car then decided to follow the trail in the opposite direction. A power line pole was leaning precariously over the trail. I had to ride through the field to get around it. The trail was only extended for a half-mile when it ended. So end to end the trail in Jonestown is less than two miles long.

It will be great if this segment connects with the main segment of the Lebanon Valley Rail Trail. But it wasn’t a wasted trip. This is also one of my ancestral homes.