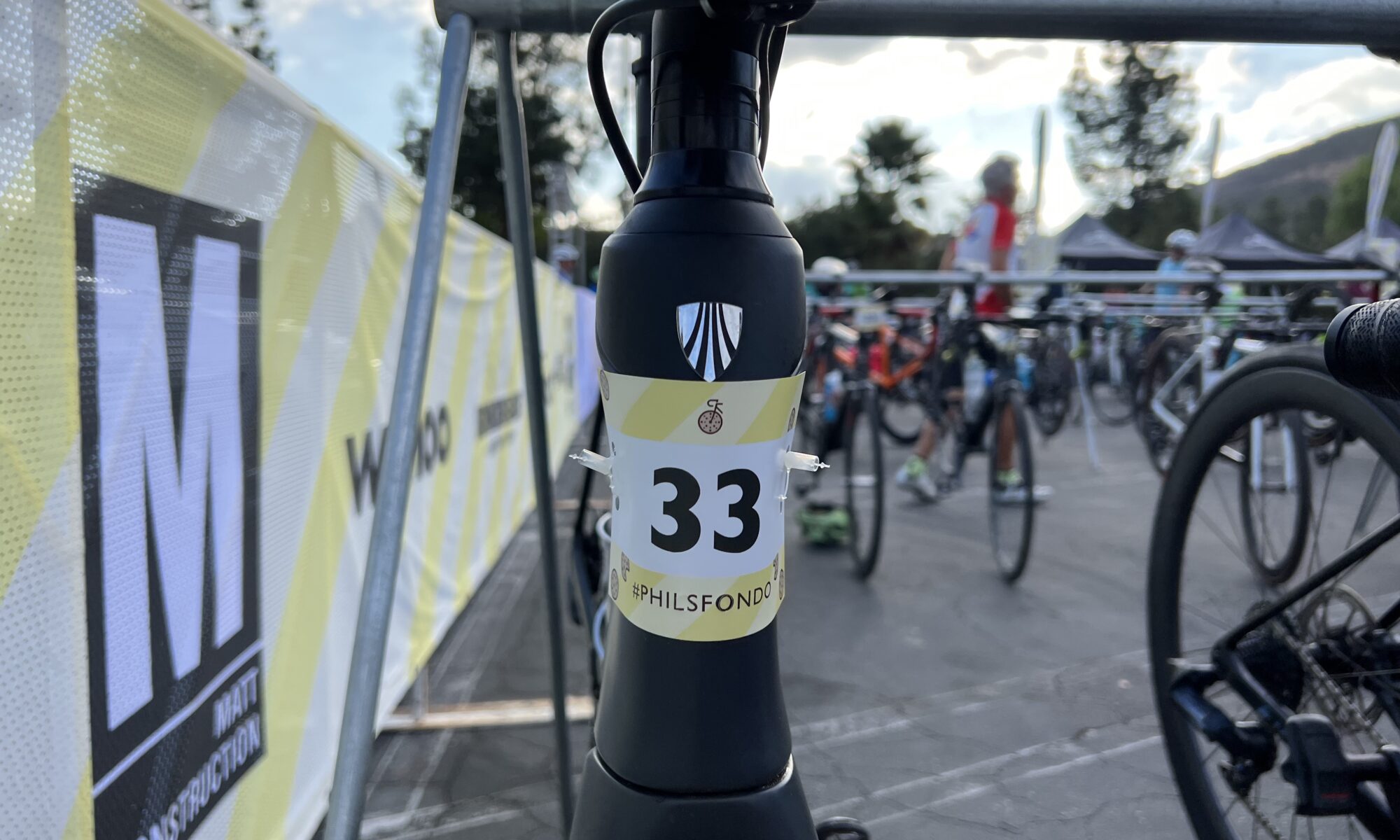 My plan was simple although I blew it yesterday. Today I would ride the shorter of the two routes offered for Phil’s Cookie Gran Fondo. I was already in a huge deficit by accidentally riding 70 miles yesterday.

I left the Hampton Inn Agoura Hills hotel and rode the mile and a half to the Whizen Plaza. Retired pro, Frankie Andreau, was the emcee getting the rides started. The 45-mile “Chocolate Chip Cookie” ride would leave at 9:00 a.m. while the 35-mile “Sugar Cookie” ride would depart at 9:30 a.m. While 35 miles doesn’t seem like much, these have some big climbs in them. In this case, there was 4,500′ of gain over 35 miles.

At the start, there were only about 20 of us remaining for the Sugar Cookie route. Almost everyone went with the first group. Frankie asked how many first-timers there were and more than half raised their hands. But I knew from my ride four years ago not to do the longer route to have something left for tomorrow.

We rolled out and followed the “Cookie” car for two miles until it pulled off. We were in a group although it was splitting up as the roads turned up. I did not want to ride in the front of the group but it was the pace I was comfortable at. So there I was in the front group of nine when we came to rest stop One. While some were debating whether to stop I knew we must get a chocolate chip cookie.

We stopped and I got a chocolate chip cookie. I split a banana with another rider and was debating whether to roll out with the group again and let them go. That decision was made for me. I got my bike off the rack and the rear tire was flat. A quick inspection and I found a goathead in the tire.

There were still three riders behind me as one had a triple flat – also goatheads. They stopped at the rest stop and saw me. But they left before I was finished. I thought they might wait for me but two of the riders, Razzle Dazzle, were clearly together, and I think the third one was too. So they were a unit and I can see that they may not have even thought about waiting for the last rider on course.

Decision made. The CO2 gave me enough air to continue but I did not want to ride the route without a spare and another CO2 cartridge. I told the guy at the rest stop that I was turning around. He seemed surprised but I was comfortable with that decision. I just wanted to get back, and get a new tube and CO2.

I held my breath. On the descents, the bike did not handle well. The squishy tire required me to brake more than I wanted to. But I came to the Mulholland climb I had done before a couple of times. And this time I was more than one minute ahead of my PR, even with a soft tire. That alone made the ride wonderful.

Arriving back, I was first. Well, I didn’t complete the miles anyone else did. I got a new tube and CO2 from VeloFix. I grabbed lunch and sat with Frankie Andreau. Reggie Miller, the former US Olympian and NBA All-Star joined us. It was fun meeting Reggie. I called him Mr. Miller and he corrected me – “please call me Reggie.” I guess I was hanging with Reggie.