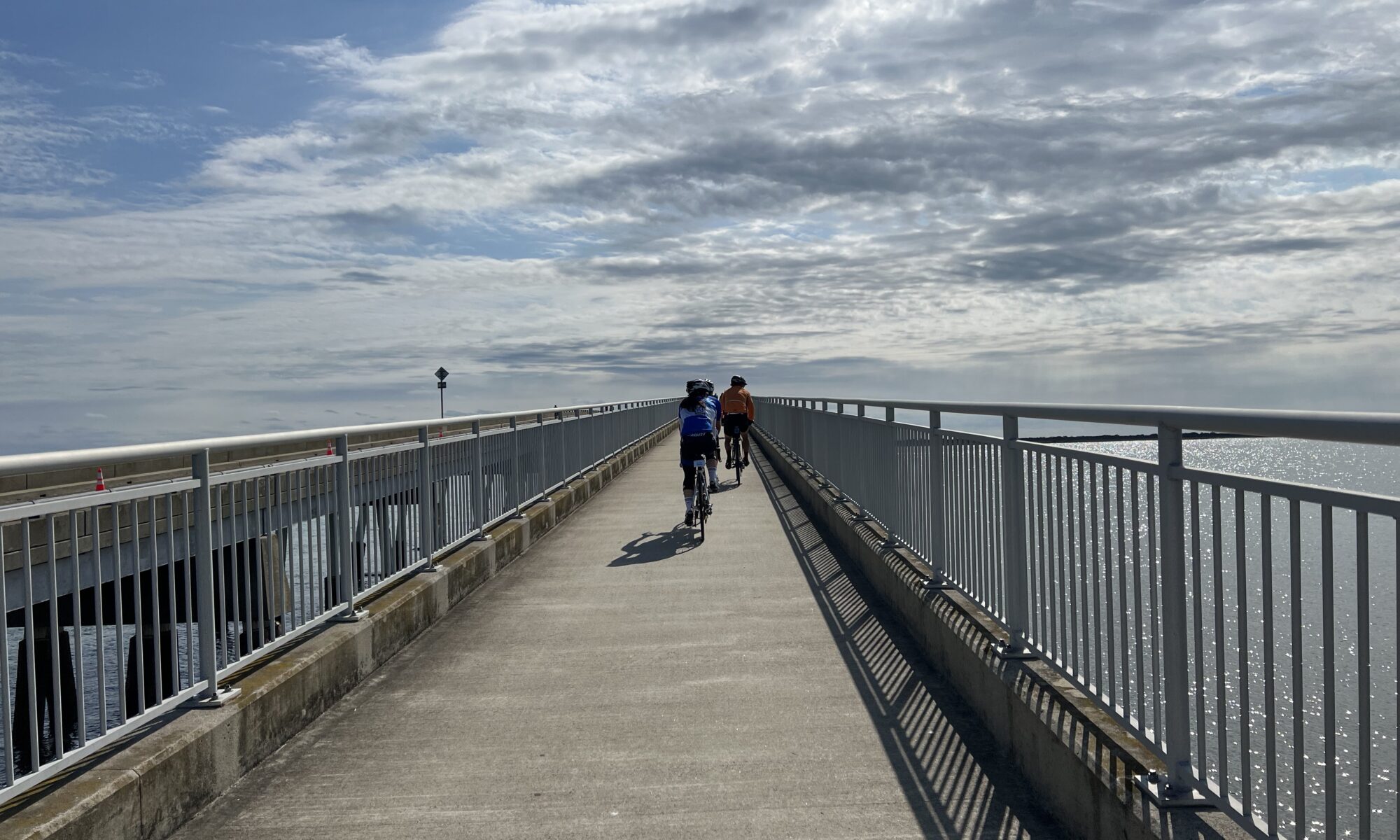 Last night I stayed at the Hampton Inn & Suites, West Ocean City. I was asleep at 10 p.m. hoping to get a full eight hours before getting up at 6 a.m. I was most interested in my Whoop Band recovery score which seems to always be poor before a big event.

It did not disappoint. Yesterday I did an easy 22-mile ride in Easton on the way here. I didn’t want to not ride at all and this short ride would not stress me. My Whoop score for the ride was an easy 13.0.

I went to breakfast at 6:30 a.m. I sat down to eat and then looked at my recovery score. It was only 31%. I was already in the red. That signifies that I have not recovered but not riding was not an option. Riding and sucking would be.

I knew no one who was riding today but hoped to see some riders from the Blair Cycling Club (Altoona, Pa.). I used to see them but haven’t for 3-4 years so either we don’t have good timing or they no longer come to this event.

The weather was cool. It reached 80℉ (26.7℃) and I certainly hoped for more of the same. But a cold front came in overnight. It was 55℉ (12.8℃) at the start. Despite a brief appearance of the sun at the rolling start, it was gray and windy.

I didn’t want to be fixated on speed. I removed the speed display from my Wahoo. And I switched the units from miles to kilometers. It’s different. They go by faster than miles but to see “164 km remaining” on the head unit at the start was sort of daunting.

I wore my red Roosters kit, arm warmers, and a vest. Many riders had knee or leg warmers. Even spotted some with balaclavas. I started riding and passing people. I should have been mindful of riding the first third easy, the second third normal, and having enough to finish strong.

Instead, I had a tailwind and took advantage of it. I was passing many riders and passed a guy on a blue bike. I noticed that he picked up the pace and followed me. He never quite sat on my wheel but I knew he was behind me. Eventually, he came beside me and complimented me on my pace. Then he added that he hoped I didn’t mind him “hanging back here because I kept a great pace.” Ha! After a compliment it was OK.

About 10 minutes later, a guy wearing a Marines jersey came flying by, followed by two riders. The third rider was the guy that had been following me. I jumped on. We went a mile or two when the guy with the big engine pulled off. Apparently, he thought he was pulling friends and asked “Where are they?” And then he sat up.

The second guy took a turn. When he pulled off he dropped too. I then followed the guy who had followed me for so long. That was fair. We came to a Live Segment on Strava and I wanted to set a PR. But not by sitting on. So I moved to the front and pulled him to the end. I got my PR. We turned the corner and he was gone. Damn.

I came to Rest-1 at MP23 in Snow Hill and kept going with a brief foot down because of the foot traffic. There was a group there called Heavyweight Cycling. Most were big guys. I asked where they were from and was told Raleigh-Durham. I never saw them after the stop although they were motoring before it. Pretty cool kits.

In Newark (MP42) I kept going through Rest-2. The location changed from last time. I did not see if it was a water-only stop or food. Actually, I put a foot down and opened my second pack of Energy Chews. I ate a couple then took off.

It started to rain. It was more spitting than anything. But it was gray and windy and I thought if I’m getting soaked then I will look to turn this boat around. I’ve ridden this event enough times to know that I don’t need to. The roads were wet but the rain didn’t last long. Actually, my kit wasn’t even wet. The gray soon gave way to sunshine.

It was a nice run into the state park at Assateague. The port-a-johns were busy. I went for food. I took a bagel. One bagel. Then I turned my nose into the wind. It would be a 30-mile headwind.

My goal, if I had one, was a six-hour century. I would need to average 16.7 mph. I had no clue how I was doing because I wasn’t displaying speed. And if I did, it was in kilometers so that may or may not have been useful. But I knew this. When I came through Berlin I knew I had 30 miles or so and probably two hours and finish by 2:00 p.m. – and that would give me a 6-hour century including stops.

I also knew then that I was screwed on nutrition. One bagel is all I grabbed from four rest stops. No fluids. After the ride when I checked, I had consumed slightly more than one bottle of fluid over 100 miles.

I continued on. After going through Berlin, a larger group went by and I started to go with them. But this was a solo ride. I passed two accident scenes with a cyclist down. Both were in groups. I don’t know these people but I know they are not professional bike handlers. It wasn’t worth it riding in the big groups that form on this ride.

I found a side road outside of Berlin to go down and have a nature break. As I got back on the road a group of Major Taylor Cycling Club riders went by. They were going just a little faster than me and I was drawn in. It was easier than fighting the wind.

Not sure how long they were together but there soon was a split with half the group riding off the front. Since I was a passenger in the back I was caught out by the split. The new group was slower and smaller.

It was here that my ride changed. Every year I have done this ride there was something special about it. The first couple of years I met and rode with some riders from the Blair Cycling Club (Altoona, Pa.). In 2018 I met Sandra. She had been dropped by two friends and I basically towed her the last 60 miles. Then she left without saying goodbye or thank you. In 2019 I met Andrew & Staci, two cyclists riding their first Metric. There was always something magical but not this year. Not in 2022, nothing.

I rode solo most of the day. I was reflecting on this may be my last Sea Gull. There was nothing special about this ride. Around M90 we passed a young lady struggling. By struggling I mean she looked like she was capable of going faster but was pedaling squares.

I was at the back and I told her that she would do well to hang with us. She thanked me and she jumped in. We were in twos at that time so she was on the back with me. Sarah* made it a mile at pace but then tailed off. I quickly decided to drop with her.

Brief convo – “Have you done this century before (not have you done a century before)?” And Sarah told me this was her first. I knew then I would help get her home, if not at a great pace then at least at her pace. Although we rode side by side a little bit, I mostly tried to have her follow my wheel as we were into a brutal headwind (last 30 miles). I never could get the pace right as she kept losing my wheel.

But for the last 10 miles we talked and I encouraged Sarah. Some of it was cycling. Some of it was just about life. This may have been the best I felt towards the end of a century but it was nice for me too to have a diversion. She made it and I was as proud as she was. (But she refused to ride an additional 25 miles with me.)

For a ride that had nothing for 90 miles, just being able to help Sarah gave my ride meaning. It was a great Sea Gull Century.

As for those additional 25 miles. I love the Oxford-Bellevue Ferry. I rode it yesterday on my way to Ocean City and thought that after the Century I would stop there on the way home. The reason was two-fold. First, this would be my last planned ride in Easton, Md. for the year. And second, I wanted to see how my body would respond to 125 miles. Even more, how it would respond to 25 more after riding 100 with a little break (driving).

I drove to Oxford and parked at the dock. I started riding and I felt good. There was no sluggishness in the legs. As I headed toward Easton I saw I was seconds off my best pace but could not lift the pace anymore. So the legs felt good but I really couldn’t dig much deeper.

I then had this fear. I would miss the last ferry. I saw a sign yesterday that it was at 6:15 p.m. I would have to ride hard the entire way. If I missed the ferry I would have to turn back and the 22-mile loop would be a 44-mile ride after the Sea Gull. And I would be pushing darkness.

When I got to the last three miles I was rolling. I came in 1:00 faster than my previous PR. I had already been designated the “Local Legend” of the “Bellevue Breezeway” with four attempts in the last 90 days. This would be ride number five.

I got to the ferry as it was coming in. I wanted to think I made the last ferry of the day but after I disembarked I saw it make another trip to Bellevue.

I’ve been riding well and finished the Century with a 17.9 mph average. Maybe better, I didn’t have a drop off in my last 22 miles as I finished the loop with an 18.1 average. Overall, I averaged 18.0 on the day. Very well down (pat on my own back here).

Maybe most importantly, this Sea Gull had a purpose. Maybe I’ll return. You never know when magic will happen.