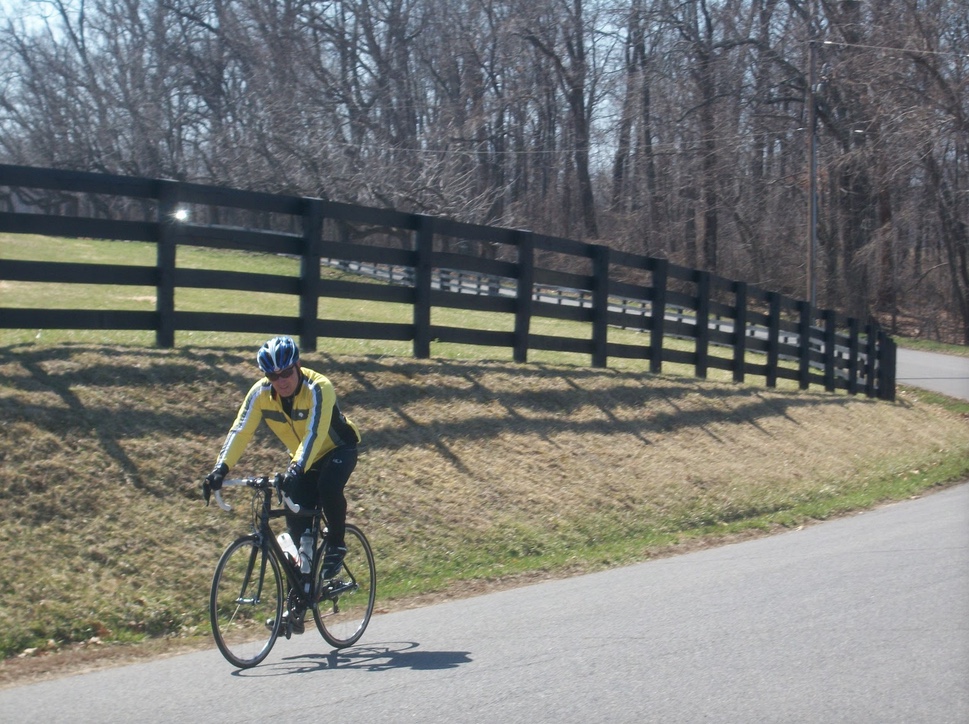 It’s the last Sunday of winter and time to celebrate with a ride. This one was a Potomac Pedaler’s CC ride which is too slow for me. While there was also an A/BB ride on the list, I’m not feeling like the BB rider I can be and if only A riders showed up I’d be dropped quickly.

My goals were simple and they evolved as I rode.

(1) Be a nice guy and ride slow with everyone else. That worked for the first mile or two but as the road turned up and I soft-pedaled soon I was passing everyone else as though they were going backward.

(2) Don’t let the heart rate go above 130. Soft pedaling works but eventually it just gets too tiring going slow uphill and it feels good to pedal harder.

(4) Don’t be the jerk who rides off and leaves everyone behind. Well, technically I didn’t because I found “Mike” from Arlington to come along with me.

(5) Find a new route to/from Charles Town. I think I did that, riding through Evergreen Golf Course.

We met and parked alongside the train tracks in The Plains, Va. For a large group ride parking is a problem but not today as the group was no more than 12-15 riders even though temperatures were in the mid 50s and it was sunny.

I soon made my way through the group and was looking at just two riders in front of me, Holly and Mike. Neither have last names. I caught both then led them through Evergreen Golf Club eventually dropping both on Mountain Road. Remember #1. Or #4. I slowed and the three of us rode to Aldie together.

At Aldie I decided not to take a lengthy break at the store so Mike and I headed out, never to see the group for the rest of the day. Since the route was listed as 47 miles and I wanted to do at least 50, I suggested we change the route and stay on Snickersville Turnpike. Mike agreed and we were treated with extreme rollers for the next 10 miles.

I really thought that with the additional miles we added that we dropped behind our group. We intersected at Foxwell and St. Louis Road. In St. Louis, Va., I stopped and asked a Loudoun Co. sheriff if a group had gone by and he said that none had. We continued on.

Back in the main group, they had a front derailleur issue at Mile 4, a flat at Mile 9, two rear derailleur issues on Snickersville Turnpike, and a bottom bracket issue as well. We might have waited until sunset and not have seen them. It was a good decision to go on by ourselves.

Mike and I stopped at the Atoka Store which is halfway between Middleburg and Upperville. No group. At this point we just decided to follow the cues and ride it home.

As we rode into The Plains I was still one mile short of 50. I simply rode out another half mile, turned around, and came back content with another 50-mile ride.

Maybe there will be evening riding this week. We just went to Daylight Savings Time. Or maybe not. But this winter was not severe like last winter. It was cold but the roads were passable most of the winter.

Refereeing and related activities as well as the Steelers run to the Super Bowl took up many riding days from me. But still, since January 1, I have ridden 303 miles. That’s not a bad winter but spring and summer will be 20 times better.