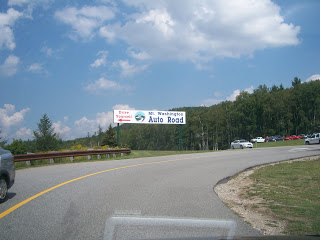 CONFUSED AND A LITTLE BIT DAZED, I AM CONTEMPLATING MY FUTURE IN THIS RACE.

“The U.S. also has a select group of climbs that are among the most difficult in the world including Onion Valley Road in California, several Hawaiian giants, unique in that they gain up to and beyond 10,000 vertical feet of continuous climbing, and the incomparable Mount Washington in New Hampshire, which may be the toughest of them all.” – The Complete Guide to Climbing (Summerson)

I’m not sure what is next. Each year I did this race it was with a reason. In 2007 (canceled) then 2008 my goal was simply to climb the mountain. I did that but really suffered.

In 2009 I wanted to try it one more time with easier gearing. But I went while battling cancer.

Last year I wanted to go back cancer-free. And I did.

After last year’s ride, I told the event director, Mary Power, that I thought it was my last time up the mountain. She asked why. I told her she did not know how hard it was to drag one’s butt up that mountain. She said not to make that decision right away but wait until February 1. On February 1 I signed up for this year.

As the race got closer I got thinking that this would be it. It definitely would be it if I didn’t improve my time. Each year my time got marginally faster and with riding last month in France, especially climbing the Col du Tourmalet, Mont Ventoux, and Alpe d’Huez, I thought I might get a little bit faster. I resigned myself to the time that when I didn’t improve I would retire from this climb.

My time did not improve. In fact, it was my worst time ever, 20 seconds worse than 2008 when I had normal gearing and crashed. At least then I lost at least 3-4 minutes in the crash with getting straightened up and walking 100 yards past a steep dirt section to get going again.

I’m not sure if I can retire when I sucked this bad.

I am trying to make sense of some factors that may have affected my time.

On the riders’ forum the night before I had met a rider who needed a ride. I told Jennisse Schule that we would meet at the tent at 7:30 a.m. After gathering Jennisse’s belongings, Cheri headed up the mountain and I decided to go for a warm-up ride.

These things I don’t know about. Does it help me or hurt me to do a climb or ride 5-6 miles before this event? I rode seven but they were easy. I think.

It was then I realized I didn’t bring any food. Though tearing open a packet of gel is a difficult task on the bike on this climb, even ingesting one right before the race would have helped.

I was in the last group to go. We left at five-minute intervals. First the reds, then the yellows, followed by blue, purple, then green. I was nearly at the back of the green. Starting dead last. Again.

There was a pretty quick sorting out on the mountain. I seemed to fall in at the back of the split in our group.

It is tough. It is effin tough. The road is steep in the first two miles and the legs hurt. Breathing is heavy and you see riders falling. The mountain teases you to continue. The mind begs you to quit.

By the end of two miles, it seemed that no one was passing me. And I wasn’t passing too many people except for 23 people I saw off their bikes walking or resting. Occasionally I would pass someone who was pedaling.

The dirt section always haunts me since it was here that I crashed in 2008. I tell myself to remain seated so the rear wheel doesn’t spin out but the road seems packed hard enough to allow me to stand in a couple of sections.

At Six-mile Curve the road really turns up. I remembered a sharp and steep curve but not the hill that follows.

The last couple of miles I passed a number of riders. Not quickly, but just slowly clawed my way past them.

In the second mile, I intended to press the “lap” button on my Garmin to record when I first stood while pedaling. Instead, I unknowingly pressed stop on the GPS unit completely ruining my recording of the race. Damn. I didn’t realize this until one mile later when I tried to check the percent grade of the section I was on and I saw it wasn’t recording.

At first, I was very disappointed in myself but then realized that it left me free to ride without thinking about elapsed time. Just pedal.

I felt pretty good for not having eaten in almost five hours and not having nutrition on the bike. Still, when I reached Mile 7 I checked the time and saw it was already 10:30 or so. I knew I was toast although how bad I wasn’t sure.

I stood one more time. For the camera. Then I crossed the finish line, collected my medal and blanket although I really didn’t need the blanket. The high temperature reached 59°  (15 C) and it seemed almost hot on the summit.

Cheri parked as second to last car in so we were the second car from the parking lot down the mountain. And first in the Harts Turkey Farms food line.

We weren’t able to stay long at the post-race ceremony because we had to drive to Allentown, Pa. for the night. But the contemplation begins. Can I end my run of Mt. Washington rides with such a bad time? I have until February 1 to make a decision but I think I will be back for one more.

And that will be it. 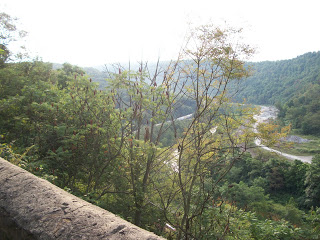 Last year I biked from Somerset to Punxsutawney on consecutive weekends for family reunions. The lowlight was being attacked by Rottweilers and it has always made for some scary riding since. And the truth is, I have avoided that section of road ever since.

Today was a near-perfect day. Rain at the very start (I didn’t say it was a perfect day), cool enough to be comfortable although the sun eventually came out around Johnstown.

Coming out of Davidsville on Pa. Rte 403 there is a wonderful three-mile descent. The grade averages 6-7% and one can simply coast. In preparation for Mount Washington, I had removed the big ring off my bike so there was no pushing the speed to extreme heights. Traffic was light and respectful until some jerk came up behind me and laid on the horn. After he passed we approached a light and he stopped. He was very angry. He reached over to wind down his window (loser) and started screaming. “GET OFF THE F___ING ROAD!” I smiled and asked him why he was so angry. Just another day in the paradise of riding.

Arriving Johnstown I was passed by a large truck, slightly smaller than a dump truck. Just after passing me, it rounded a curve and a large piece of rebar came flying off the truck, crashing to the sidewalk and smashing into a telephone pole. A few seconds earlier that would have been me. Ouch.

In Johnstown, I passed Coney Island Hot Dogs. It was 8:30 a.m. I looked in the window and thought maybe they’d be serving breakfast but I saw a worker serving hot dogs. Who eats hot dogs at 8:30 a.m.? People in Johnstown, that’s who.

The climb out of Johnstown on Pa. Rte 271 was nice. I could hear trains creeping in the valley. The cool air still enjoyable.

I followed 271 through Mundys Corners, Nanty-Glo, Twin Rocks, and Belsano Shortly after Belsano, I tried a new route – Snake Road. I thought at first it was named for serpents it soon became apparent that it was named for the way it snakes through the forest.

I came back to 271 and at Nicktown, followed it to Northern Cambria. I wasn’t going to take the shorter route through Marstellar and risk seeing those dogs again.

After Northern Cambria, I stayed on Rte 219 despite the warnings a bridge was out three miles ahead at Emeigh. It was. I simply took my bike and walked over it.

After Cherry Tree, I used the Garmin for the first time to direct me. Each time I ride through here I seem to take different roads and I found some today. Once I got to Smithport, I knew exactly where I was going but there was one problem. Fresh oil/tar on the road. The last four miles had the tar and chip surface. Gravel is not a friend of road bikes and neither is tar. I arrived but the bike wasn’t in such good shape.

Outside of the messy tar, it was a very enjoyable day on the bike. And no dogs.