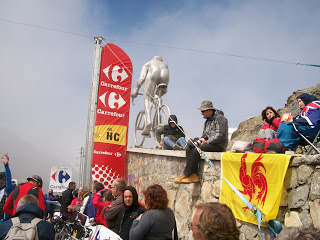 I thought that when I pedaled 5,000 miles in 2010 that that would become my new annual goal – the base by which all future years were measured. I now realize that 5,000 miles are a lot of miles for someone who works full time.

I fell short. Way short. Just 3,700 miles this year. And I really haven’t analyzed why. Some things stand out such as I biked home from work 14 times last year. This year, just three. That’s about 450 miles or so. But where are the other 800-900 miles?

Ironically, last year my total mileage was never a goal and in some ways, I was wrong to think of it as the goal for every year. Just ride. Enjoy the air. The sun. Even the rain. But most of all, enjoy the ride.

2. Civil War Century. Rode slower than last year. And cramped. But this route is special. How can one not be moved when riding through Gettysburg?

3. America’s Most Beautiful Ride. Thirty-eight degrees and raining at the start at Lake Tahoe. Never higher than 50°. But the best I ever felt on a bike for 100 miles. And it was beautiful.

4. Mont Ventoux. Cold and rainy. And windy – 50 mph at the top. But cross one off the bucket list.

5. Alpe d’Huez. The nicest day I had in France and I was joined by my friend, Brian Hutchins, for the climb up this iconic mountain.

6. Col du Galibier. I did not make it and am not ashamed to admit it. Cold and rainy at the start, it got colder and wetter the farther up I went, to the summit of the Col du Lautaret. It was simply the coldest I have ever been on a bike. I turned around and went hypothermic on the descent. After drying off and changing clothes, I drove to the top – through 3-4″ of snow. I later learned 200 cyclists had to be rescued from here two days earlier. It was July 19.

7. Pulling the Grandkids. I bought a child’s trailer for the bike and was able to take grandsons Andy and Aiden for a few loops of their neighborhood on Thanksgiving Day. And on Christmas Day at our house, the kids wanted — to go for a ride with Grandpa.

10. Mount Washington Auto Road Bicycle Hillclimb. My fourth climb up this iconic mountain, this was the first time my wife, Cheri, joined me. She was impressed by my suffering.

In addition to the riding, I met some very nice people along the way. At Lake Tahoe I met Rodrigo Garcia Brito — he and I would be riding partners for the entire 100 miles (or 98).

Along Rte 31 on the Allegheny Plateau near Somerset, Pa., I met Rolf, from Denmark, who was exploring part of the U.S. I invited him to my niece’s graduation party to feed him. (I called first to make sure it was OK, OK?)

Many people go to the Tour de France and hope to see “The Devil,” a Tour fixture for years. Most never see him. I saw him twice and was photographed both times.

But it’s a random act of kindness I will most remember. Near Carpentras, France, I had been locked out of my prepaid B&B. All the hotels in the city were full. I had no place to go. I found a campground, Camping Les Fontaines, just as they were closing at midnight, or was it 1:00 a.m.? They were sold out. But I didn’t have a tent anyhow.

The owners graciously allowed me to park in their lot – which was all that I wanted. And brought me a pillow and blanket. And offered me a towel. It wasn’t the most pleasant night I had sleeping – in fact it was pretty awful – but when I slept I knew I was safe.

I would have gladly paid for a space but they didn’t charge me.

In 2011 I missed my mileage goal and I will have to rethink whether I want that to be a goal for 2012. Some of my best rides (Mount Washington – 8 miles) weren’t about the mileage. But at the end of the day, or at the end of the year, I should not be disappointed where the road took me.

EDIT (2020) – In looking back at this post some nine years later, I was fretting about only riding 3,700 miles while saying it’s not about the miles. In retrospect, this was one of my favorite years. It really isn’t about the miles but the experiences can be anywhere.