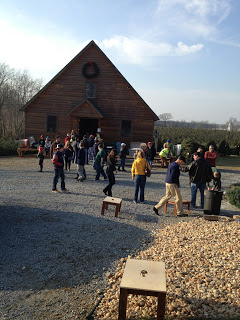 One thing about distance riding is that you have plenty of time to let your mind take over and absolutely enjoy the peace and solitude on a bike. But when things aren’t going so well it can be too much time fighting the cycling demons.

While it sometimes felt that I have made this 70-80 mile ride a hundred times, in truth I have made it less than 15 times. The distance is nice but it’s also a dangerous ride with up to 10 miles on some hi-speed two-lane roads with no shoulder. It’s a matter of pick your poison depending on which of two major routes to take.

Having a family gathering at Bethany’s, it was a perfect day to bike. It was 32 degrees when I left the house. I was kitted up and was toasty warm. I rolled out of the house towards Manassas. I wasn’t concerned about time and thought it was a good thing because in the first 10 miles I seemed a little sluggish.

In Manassas I came to a road closure for their annual Christmas Parade. It took me down to Wellington and then over to Ashton Ave. I hadn’t gone this way, even in a car, but realized I was parallel to the very busy Sudley Road and was thankful that even though it was a mile or two longer, I have found a safer way through Manassas.

After a stop at the visitor center at the Manassas Battlefield Park, I headed west on Sudley Road. This is a dangerous two-lane road with no shoulder. Coming to the Aldie Market, I stopped and bought two Snickers bars. I was sluggish.

After crossing US 15, I stared ahead at Bull Run Mountain. I got on Mountain Road but was thankful this road was parallel to the ridge and I would mostly be going around the mountain and not over it. At Mile 40 in the town of Aldie, I stopped at the country store and bought a king size Snickers. I was sluggish.

Snickersville Turnpike, aptly named today, is an unmarked two-lane country road which is a beautiful ride. As it approaches the Blue Ridge it may trend slightly uphill but is mostly rollers, some of them pretty steep. It is a continuous ride of up and down.

After 15 miles you reach Bluemont at the base of the Blue Ridge Mountain. And here the road goes straight up. I was worried. I wasn’t feeling it. I was sluggish.

On November 9 I had ridden 50 miles but it wasn’t really a 50 mile ride. I rode to a doctor’s appointment and back and added a little more. That is important because the last long ride I had was on October 21 in Austin at the Livestrong Challenge. I had plenty of short rides but nothing more than 30 miles since.

I felt great that day. After 80 miles in Austin I pedaled faster — I averaged more than 21 mph over the last 20 miles. Solo. Not drafting in a group of riders. And I know that when the body is trained it knows how to release fat stores so that you can ride as fast, or faster, after 80 miles. Today, I was sluggish. And it was always on my mind.

Even the flattest section, Sudley Road, I struggled to average a pedestrian 15 mph. Actually, I didn’t average 15 mph.

Time dragged on. Every pedal stroke reminded me how unfit I am. The cell phone taunted me. Use it! Call ahead and tell them you can’t do it and come pick you up.

Every mile. Every mile I fought that temptation. I got to the top of Snickers Gap (US 7) and knew it was all downhill. Well, downhill to the Shenandoah River then flat, with rollers, the rest of the way.

Turning on Shepherds Mill Road every little rise in the road gave me trouble. As I passed Moose Apple Christmas Tree farm I pulled in and looked at maybe more than 50 cars parked. Although there was a big line waiting to pay for a tree, I went to the front “just to say hello” to the owner.

I told him I was there during Bike Virginia and he told me he remembered. He said I was from Woodbridge and worked for the Postal Service. I must be memorable. That good feeling was enough to power me the next five or six miles.

My thought was my next goal – Sheetz. Even though it was two miles from Bethany’s I knew I couldn’t make the last two miles with a food stop.

I stopped at Sheetz. I ordered food. After paying and standing while waiting for my food I didn’t see any seats in the store. I felt too tired to stand and looked for a place to sit on the floor. But I didn’t. I was sluggish.

After eating and resting I got ready for the last two miles. Crossing US 340 there is a slight hill and I struggled to get up it then celebrated as I knew that was the last hill to climb on the day. One mile later I arrived.

I went in the house to a number of concerned family because I was so late. I explained I was sluggish. Although it has been six weeks since my last long ride I explained how quickly one can lose fitness. I blamed the cold as one burns more calories, I think, keeping warm. And pedaling with tights I figured must slow me down some too.

I was almost too tired to put the bike away but I knew I would have to before I could shower and shave the Movember mustache. I had leaned the bike against my parents’ car and now walked it down the driveway. I didn’t think much that it didn’t seem to roll freely. In fact, I had to coax it down the small hill on their driveway.

At the car I went to remove the wheels. Since I had been pedaling in low gear the chain was on the top sprocket and it’s easier to remove and replace the wheels if one moves the chain to the lowest sprocket. I lifted the bike and turned the crank with my hand and shifted gears. The wheel spun. Then stopped. Crap!

I looked at the rear brake and it had somehow been misaligned. The left brake shoe was solid against the wheel. I had just ridden 78 miles with the brake on.

Of the thousands of miles I have ridden one thing I don’t normally do is check to see if the brakes are misaligned. But they can get pushed or knocked out of alignment and it’s an easy fix to put them back. One thing you don’t want to do is to ride 77 miles with the brake on.