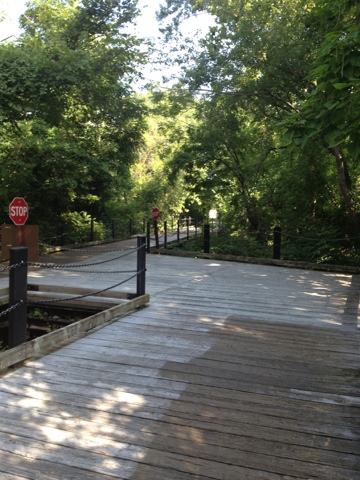 It was supposed to be a simple ride along the Mount Vernon Trail and across the bridges that span the Potomac River into Washington, D.C. But this one hurt.

I parked at Gravelly Point. It had rained much of the morning although the rain had mostly stopped. Everything was wet and as I set off there were still raindrops falling although the sun would soon come out and make it steamy in a way that only D.C. can be after a summer rain.

Just a mile into the ride the rain subsided. After the Memorial Bridge, I slowed to a crawl as a gaggle of geese were blocking the trail. A runner from the other direction slowed to a walk and I remarked that the geese weren’t in any hurry. He agreed. These geese were not afraid of people. Or bikes.

Once underway I came to the boardwalk section which is an elevated trail for about 200 yards. At the end one must zig-zag to stay on the trail. Technically, it was built as a 90 degree left which comes to a T. To the left is the trail to the Teddy Roosevelt Bridge. To the right is the trail which continues into Rosslyn and one can cross the Key Bridge into Georgetown. But for riders on the Mt. Vernon Trail, this is really just a zig-zag nuisance.

But the wooden intersection is wide enough that one can simply cut the corners and keep most of their speed. I did.

These boards were wet and in this section they are painted too. Why in the world they would be painted I don’t know because that only makes them slicker. I cut through the apex of the corner ending up near the left side of the boardwalk trail as I came through the intersection.

As I exited the turn I saw a rider coming at me. And in a millisecond my wheels slipped out from under me as they continued through the curve. My bike was suspended mid-air horizontally as the wheels slammed up against the sideboards.

It happened quickly. My last crash I knew was coming a second before I hit and I instinctively braced my fall with my hand and broke my wrist. There was no warning this time.

One second I was upright and the next second I was hitting the deck hard. I landed on my shoulder and my head whipped against the deck. My thought was shock at how hard my head hit and then thinking I’m so glad I am wearing a helmet.

I heard the cyclist coming towards me crash and I felt bad that my crash apparently caused his also. Unlike me who was riding on road tires he had mountain bike tires and he still went down. It was like ice out there.

But he was also the first on the scene to check on me. I stayed down for maybe 20-30 seconds but he was quick to help me up which was not a good thing to do. Check to see if something is broken.

He reached for my hand and one wasn’t enough. With both hands he dragged me up. He asked if I was OK and I managed a manly response of “yes.” I briefly started to sit on the trail then thought that wasn’t too convincing that I was OK. So I thanked him and started pushing my bike to the end of the boardwalk trail.

Upon reaching the end, no more than 50 yards and probably a lot less, I thought again about sitting but decided to get on and ride. My body wanted to sit down. But I ignored the warning signs and remounted. Clearly, I wasn’t right and after crossing the Key Bridge into D.C. I decided to make my way back to the car and head to the E.R.

I was in pain. Lots of pain. But I rode an additional eight miles after the crash before reaching the car. Had I turned around immediately I would have been 2.8 miles back to start. But I wasn’t thinking straight.

At the E.R. I had little mobility in my arm and shoulder. Still, I was surprised when I was told that I broken my collarbone. I sort of expected that I would have heard a snap or crack which I didn’t. Of course, I heard my bike crashing up against the wall and me hitting hard. But the pain is enough to believe him because now that hurt.

UPDATE JULY 8, 2013: It does hurt. I have withdrawn from RAIN – Ride Across Indiana which is on July 13 and the Mt. Washington Auto Road Hillclimb on August 17.