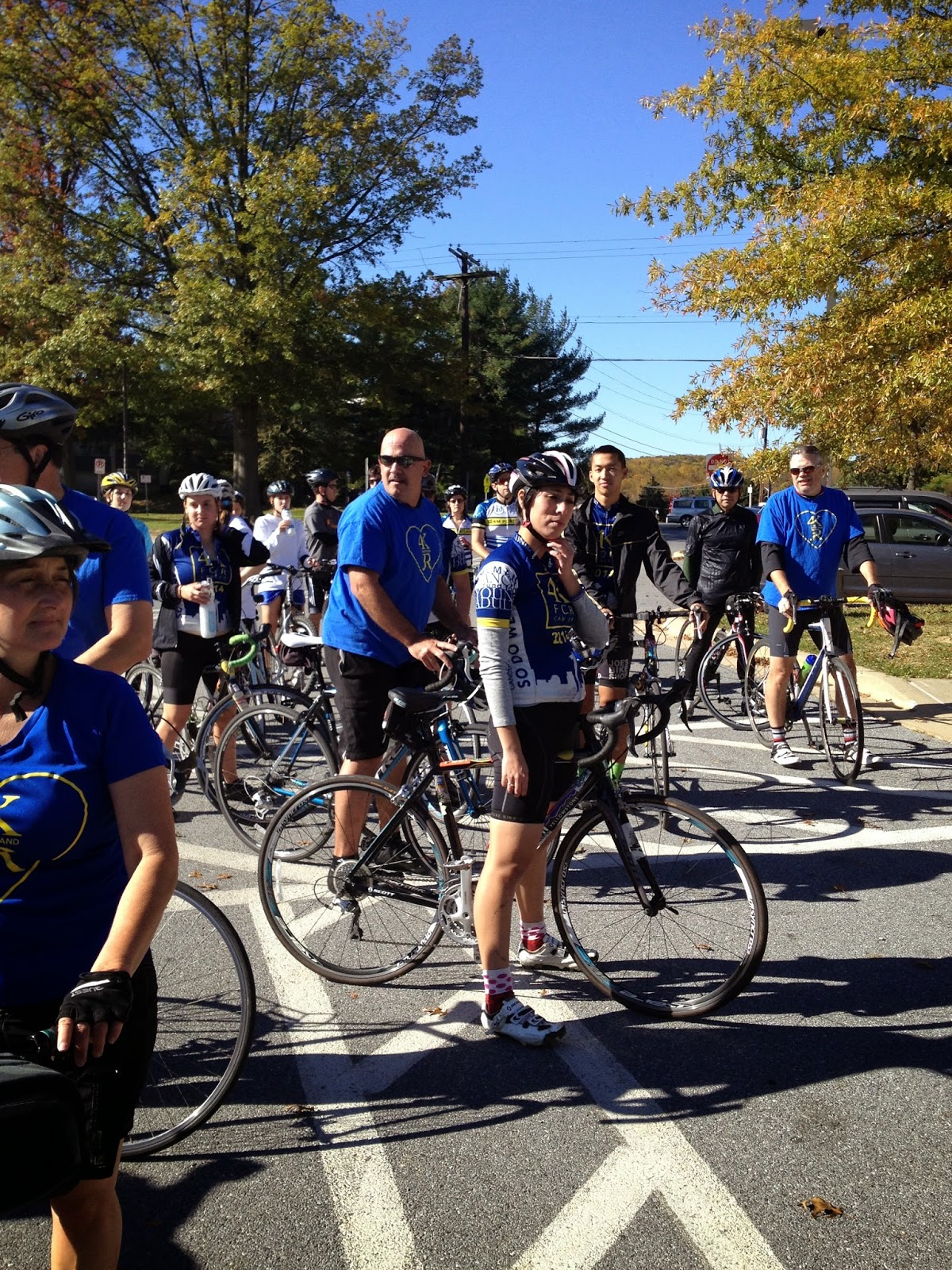 On June 14 I was riding on Berthoud Pass with Bradley Allen, climbing on the lower section, tears in my eyes. Then I knew I had to have a Ride of Silence for Jamie Roberts. She had been killed the day before and I was numbed by the news. 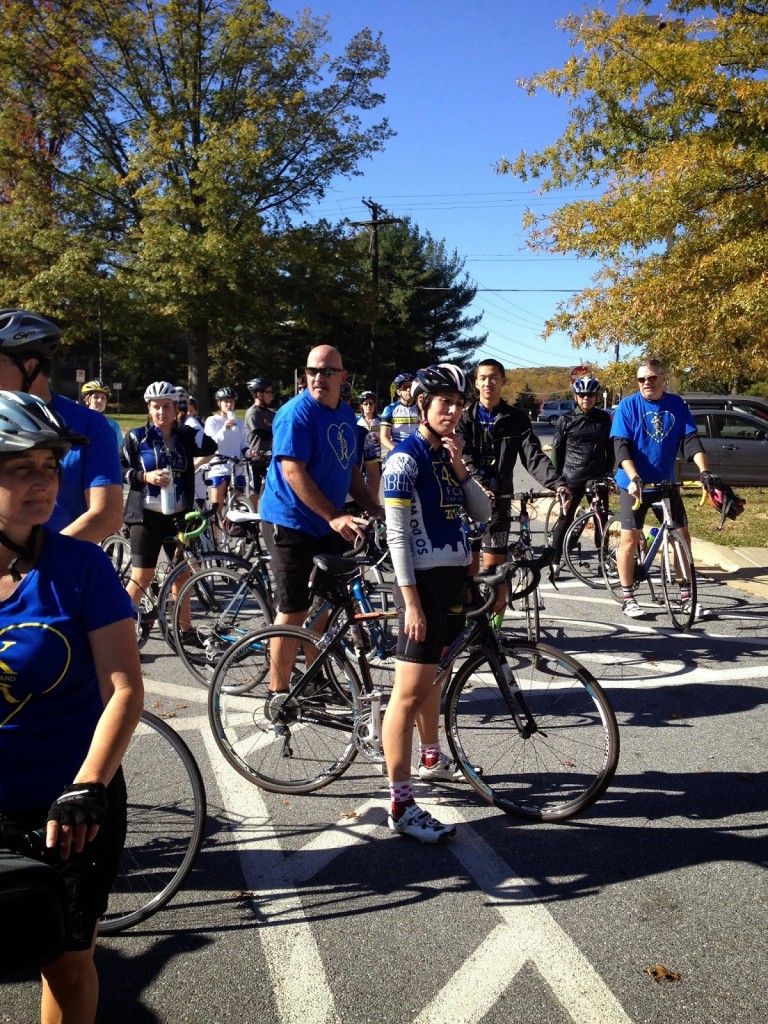 The logistics were relatively simple. We weren’t going to Kentucky so I made a decision to host it in Rockville. I had to wait for the 4K for Cancer to finish on August 9 so I was thinking mid-August. But Jamie’s team, Team Portland, suggested a date near her birthday and, working with her family, we settled on this day. 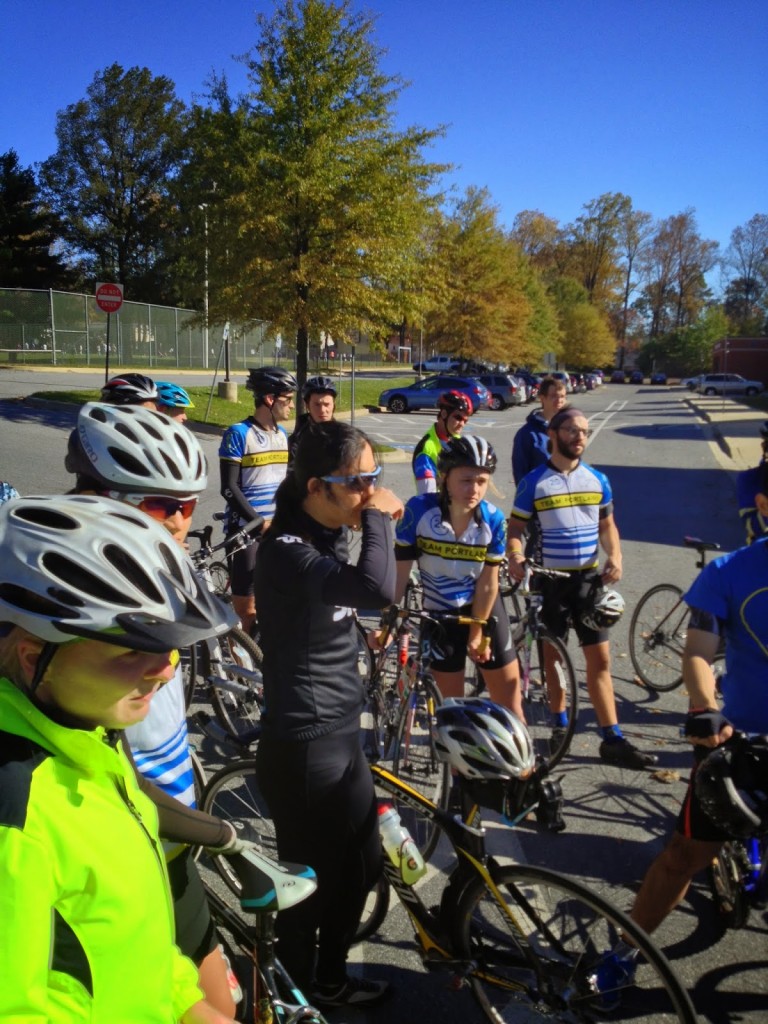 I had no idea how many to expect. I first thought we would have a dedication circle, 4K style, but upon seeing all the people, roughly 60, we instead brought everyone into a circle, with their bikes. I welcomed the group and gave instructions on the ride (keep silent and ride on!). Jamie’s father, Bob Roberts, also thanked people and gave us more details on the route. 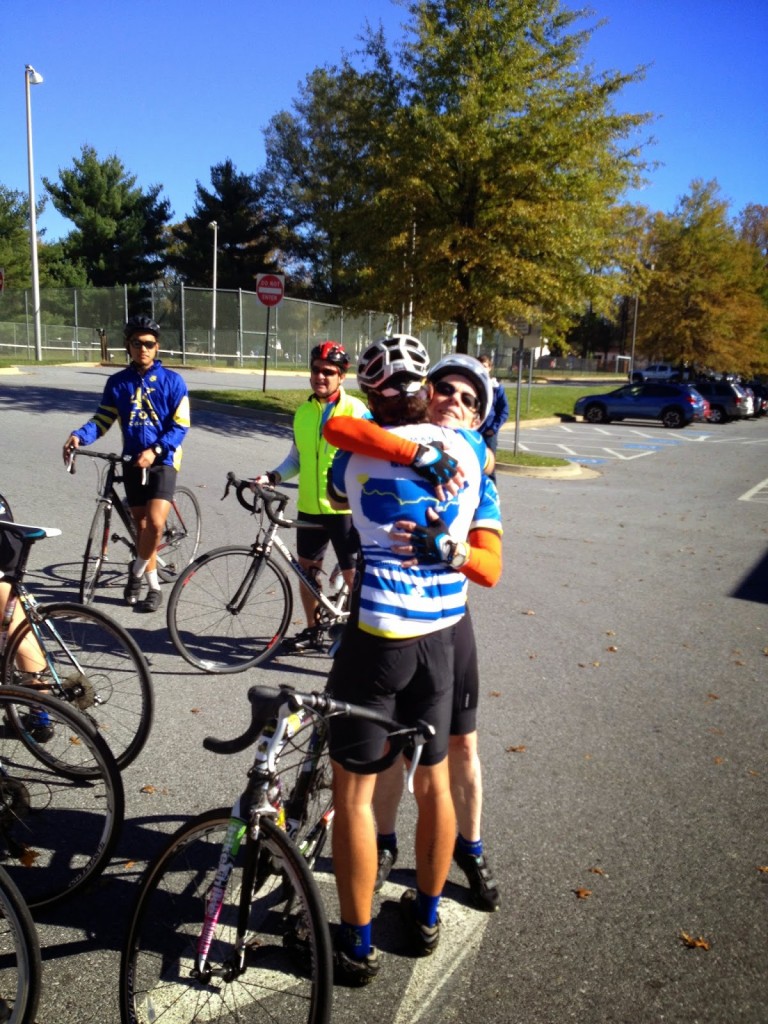 Although Team Portland brought more than half of their team, I asked Shelby Perkins to read a modified version of the Ride of Silence Poem. Shelby was also a 4K alum, Team Seattle, but was a college classmate and teammate of Jamie’s as well.

Our helmets on tight and heads down low,
We ride in silence, cautious and slow

To Jamie — not with us or by our side,
May God be your partner on your final ride


(Credit/paraphrased from Ride of Silence Poem, by Mike Murgas)

And then – I forgot to add a moment of silence! I suppose it wasn’t necessary since we would ride for the next hour in silence but I still wanted to do that. 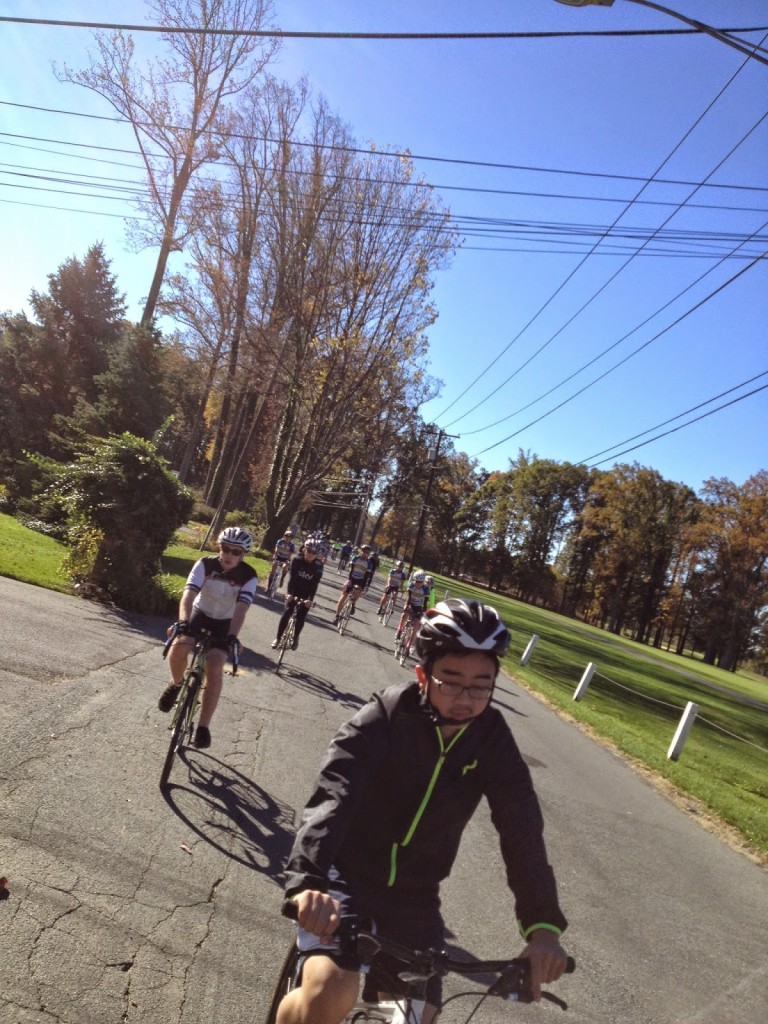 We started on Bauer Drive then rode towards Rock Creek Park. It was beautiful looking back and not seeing the end of the riders.

We reached Rock Creek Park and tried to maintain double file on the path since going to single file may cause a traffic jam. As we came upon a walker, Bob, who was riding side by side with me, coughed loudly to get their attention. Later, as we came upon a couple stretched across the path I announced we were coming by with a funeral procession on bikes. The guy laughed! I imagine he was embarrassed when he saw our silent procession, with black arm bands and lights flashing. 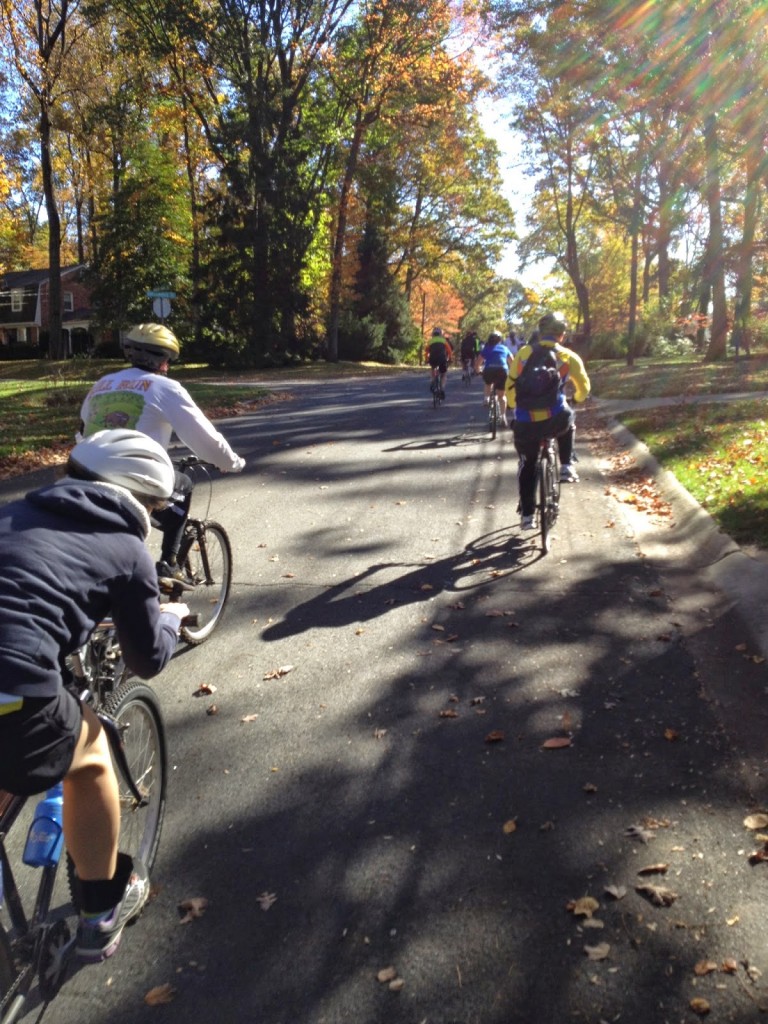 As we entered Jamie’s neighborhood there were a couple of hearts drawn on the street with Jamie’s name. As we passed her house we saw a 4K Flag and signs for 4K JR and Jamie Love.

We rode at 10 mph and complete the 10 mile loop in one hour. Back at the school we gathered once more. Bob spoke and hugged every single rider. He asked for anyone to talk and called on me – and I was deep in personal thoughts to share with him, so I declined. But Shelby spoke and then we started saying our goodbyes.

Both Team Seattle and Team Portland asked me to meet them for lunch. Team Seattle was first which is the one I accepted but wish I could have gone with both groups.

It was an amazing day honoring Jamie. Friends, especially her Team Portland teammates, some “strangers” (other 4K alumni that had not met her), some of the Key to Keys riders, and total strangers joined her family in riding for her today.

I could feel Jamie’s presence in the wind and how the leaves fell. Complete silence except for the crunching of leaves under the wheels. I wish we didn’t have to have this ride but since the events of June 13 were tragically real, it was great to honor her. 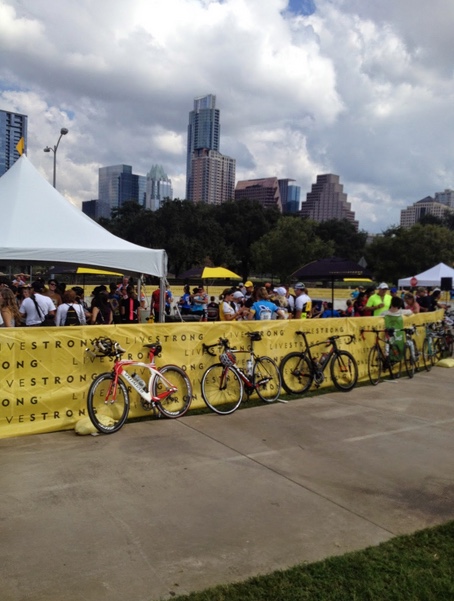 This was about the LIVESTRONG weekend. Saturday morning I went to Mellow Johnny’s, Lance Armstrong’s bicycle shop, where I had reserved a bike for the Challenge. Reservation was simple and efficient. I recommend working with Peter Finklea, the Rentals Manager and I’d gladly rent there again.

I went over and met Will Swetnam and six other riders from Cyclists Combating Cancer at the Grand Hyatt. We rode five or six miles to Rudy’s, a country store / gas station / BBQ. That was a good lunch. As a first-timer they let me sample their “three main food groups:” Juicy beefy brisket, lean brisket, or turkey. I went with the lean brisket.

After lunch at Rudy’s we went over to the LIVESTRONG headquarters for packet pickup. As part of Cyclists Combating Cancer I was happy to find the room dedicated to our CCC group.

In the evening I attended the LIVESTRONG Awards dinner since I was part of Cyclists Combating Cancer, the top fundraising team. Unlike past dinners, I wouldn’t say there were headline speakers (no Lance Armstrong) but everyone, especially the award recipients, moved the audience.

After dinner I spoke with outgoing President/CEO, Doug Ulman. He was kind enough to pose with my new Team Alex jersey, in honor of Alex Shepherd.

It was a late night, a short night, and a very early morning. I was out of the hotel at 6:00 a.m. At check-in Saturday, the volunteer had encouraged me to get to the $500 threshold. I was at $240 at the time and he told me to come back Sunday. I have some wonderful friends who donated and thus I had earned a backpack overnight. I needed to get there early and pick it up before the event.

At the Challenge I was joined by Vanessa Beltran. She refereed for me five years ago and rode in the Texas 4000 from Austin to Anchorage this summer. We signed up to ride 100 miles.

Or maybe I should say I signed up for 100 miles. I love distance riding and there’s something about going the distance in a cancer ride. But Vanessa hadn’t ridden her bike since August 8, the day she finished her ride in Anchorage.

At the first rest, Vanessa saw a rider go through and pointed her out to me as I might be interested in talking with her. Once we were on the road, we first caught Kathryn Flowers, a staffer with the Texas 4000. After riding a while with them, I excused myself and went ahead to catch the rider who Vanessa told me was up the road.

I caught the rider and as I pulled up beside her I said “Seattle 2013 — that would be Bradley Allen’s group.” Alaknanda Renukuntla, who went by “Lucky,” looked at me in surprise. After chatting for a few minutes she told me that Bradley said “if you don’t already know Barry Sherry, you will one day.”

We rode into Rest Stop #2 which was a Texas 4000 Rest Stop. We met a number of the 2015 team. Vanessa was having a great time meeting them. Vanessa loved the rest stops and she took every opportunity to ask volunteers and riders their stories. And that is what the ride is really about. It’s not about the miles.

The weather was great. It was about 70° with a cloud cover as we rolled out. It didn’t burn off until more than halfway through the ride and even then, only reached the mid-80s.

I like this course. Two years ago I averaged almost 18 mph on the 100 miles including 22 mph for the last hour. And today I felt good. I certainly had 100-120 miles in my legs. I was enjoying reminding Vanessa of that. And she reminded me she hadn’t been on a bike in two months.

“Lucky” would spend more time at this stop and we would leave her here.

Vanessa and I rolled ahead to the 4th stop and I counted down the seconds to the 10:30 cutoff. We missed it by a minute. At the stop, we met students from the Hispanic Student Association at the University of Texas. We talked to them about why we are riding. We talked about Jake Grecco and Alex Shepherd. The students seemed surprised that kids would have cancer.

Although we had missed the cutoff I was already resigned that 65 miles would be enough. Actually, a volunteer offered to let me continue but I wasn’t to go on without Vanessa. I was enjoying the company and she needed a ride partner. It’s not about the miles.

Talking about the battles was more important than cranking out the miles. At the rest stop, we talked to the Grassroots winner who talked about his wife, Brianne. We also decided that it’s not about the miles and decided to ride 65 instead of 100.

Until Thursday’s ride which I unexpectedly rode 55 miles, I thought I would need 100 miles to reach 5,000 for the year. But I came in needing just 46 miles and would get it no matter which route we would ride. So my Livestrong ride would make 5,000 for the year whether I rode 65 or 100 miles.

Before cancer I didn’t track mileage other than look at the odometer on my bike. Unless the battery died, the odometer method worked great and I never had to record anything. But using a Garmin it became necessary to use a log.* When I returned from treatment in 2010 I started tracking mileage. And while mileage was never a goal, 5000 miles just seemed to be the right number for me. In 2010 I reached it on the LIVESTRONG Challenge course – Philly. It wasn’t during the August event but I drove there in late November to reach 5,000. And today it would be during an actual LIVESTRONG event.

At the finish line the survivors are recognized. It was the only time on this day I allowed myself to be a survivor.

Five years ago I was choked with emotion. Today I was all smiles.

Waiting for me at the finish was a volunteer, Haley Gold. She was at the dinner with us, she’s an intern at LIVESTRONG, and also rode with the Texas 4000 this summer in Vanessa’s group. We saw her this morning as we rolled out at 7:30 and she waited for us, for me, to finish. It was very meaningful that she was the one the presented me with a rose.

It was a day I felt good. If I didn’t have the rental bike which needed to be returned by 5:00 p.m., I may have ridden 20 miles back to Buda, turned around, and finished with 100.

But instead we went to the LIVESTRONG lunch in the tent. And met other riders.

It was a day to remember my friends who passed. I lost a good friend, Joe Petrucelli, this past year. And to honor those who are battling. Good thoughts for Marilyn Chiodo and George Born. Katie Bugge. Brad Lawmaster. Ned Lowmaster. Patricia Lawmaster. Elaine B. And so many more…

And today was especially for Alex. Twelve years old and battling. I can’t imagine. I am hoping that next year he can come here, or to Davis**, and get his own yellow flower.

And I’ll be riding with him.

EDIT/EPILOGUE
___
*The evolution of tracking. I had a Trek bike computer that tracked distance and speed and had a built-in odometer. It was an upgrade to go to a GPS device (Garmin) but it did not have an odometer, thus it was necessary to use a log or a spreadsheet. Garmin also offered their website, Garmin Connect, where one could upload their rides which eliminated the need for a log. Later, RideWithGPS and Strava would offer their services as well. In those early days, that also meant using a USB cord and connecting the device to your computer for upload. Very clunky so I simply used a spreadsheet most of the time. Later, the devices became wireless and a ride is uploaded automatically once a ride is completed.

**There used to be a ride in Davis, Calif.