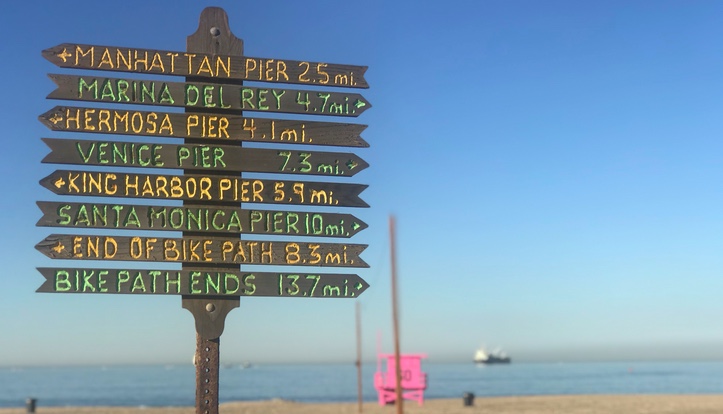 Having just returned from California from the Phil Gaimon Cookie Gran Fondo weekend, I need to revisit my planning – for next time, you know.

All in all, it was a great trip.

In 2019 I am celebrating my 10-year Cancversary and will ride 10 miles (at least) every day. That affected the flights that I could take. If I fly out early it has to be real early so I have time to ride when I arrive. Or I can ride in the morning and travel late – but that one isn’t for me.

I left home by 4:30 a.m. for Washington-Dulles. I parked in the long-term Economy lot and was still at my gate by 5:43 a.m. – two hours before scheduled take-off.

In Terminal B is a Five Guys that served breakfast sandwiches. I had the bacon, egg, and cheese sandwich. And it was good.

The flight arrived LAX on-time. My only checked bag was my bike and despite the luggage arriving at Terminal 6, mine was an Oversized bag and arrived in Terminal 4 at the Oversize Baggage.

I took the hotel shuttle to the Fairfield Inn and Suites – El Segundo. Arrived by noon. No room was ready but I built my bike in the pool area (only a few funny looks). I jumped on my bike and visited – In-N-Out Burger which was right next door. Then I rode west – towards the ocean.

I had texted Robert Hess and he offered to pick me up at the hotel for a ride. I told him I already found the bike path and could ride to meet him. That was better. We met close to Manhattan Beach then rode north towards (but not to) Venice Beach. We found a straight section used for KOMs and both went moderately fast.

RIGHT: By taking the hotel shuttle from the airport I avoided one day of car rental charges.

RIGHT: By renting in El Segundo, I avoided the LAX fees on rental cars. In addition, a much higher rate.

I drove to Thousand Oaks where I stayed at the TownePlace Suites by Marriott. I was going to stay at the official hotel of the Fondo, the Hyatt, but the rooms were $60/night more.

I was 10 miles from the venue on Saturday and decided to ride there instead of drive. That also made my decision to choose the 40-mile ride over the 50-mile ride.

One problem was I was riding directly into a low sun on Thousand Oaks Blvd. Even with two rear lights, I was worried about the traffic seeing me.

The hotel was only about 15 miles from Sunday’s venue so I could not complain. Plus it was very close to an In-N-Out Burger and a Chili’s.

I was initially going to ride in Santa Barbara on Monday but decided to ride again in Manhattan Beach. I did not explore the southern end of the trail before and I could save a day’s rental charge.

RIGHT: By getting the car back before 11 a.m. I would have three days’ rental and not four.

One problem was there were wildfires including one I went by one Hwy 101. Waze found a better way but that meant hundreds of drivers all used the same side streets. I got in a little late but within tolerance.

Once packed, their driver took me back over to the Fairfield Suites where I boarded the Fairfield airport shuttle, the one that dropped me there four days earlier. I don’t know if this was cool or not but when I checked out on Friday I asked Scott Trexler at the hotel and he said it would be no problem. Of course, he wasn’t working when I returned.

I rode south to Redondo Beach then one last time to In-N-Out Burger. I went back to the car rental location where I had left my luggage. I think they were more bemused than annoyed that I tore down the bike in their office and packed it in the case.

At the airport, I found a restaurant and watched the Steelers-Dolphins on Monday Night Football (Steelers won 27-14). About one hour later I boarded the redeye flight to Dulles.

Arriving Dulles, I had to figure out where my bike would arrive. It came in on the Oversize Baggage belt. It has come down the regular belt before (ugh) so I have to figure out by airport where it will arrive.

I went back to my car in the Economy lot then to Chick-Fil-A, Ashburn, for breakfast before getting the Trek Pilot out for a ride on the W&OD. I had packed the Domane for California but also brought the Pilot and left it in the car. It was on its side covered by a blanket in the car. Then when arriving back, rather than trying to rebuild my Domane, I could just jump on the Pilot and ride.

After riding and dropping the Domane at the bike shop (broken front derailleur), I found myself fighting drowsiness on the 30-mile trip home. That redeye took it out of me but was necessary if I was to ride today. The other option on American was 10:30 a.m. arriving at 6:30 p.m. It would be hard to ride in the morning, tear down the bike, and get to the airport on time. And it arrived too late for an evening ride.

I am comfortable with almost all the decisions I made for this trip. I like the hotel shuttle and the first night near the airport. It worked out renting off-site. And getting back to the hotel. Keep this in mind if I do this one again.