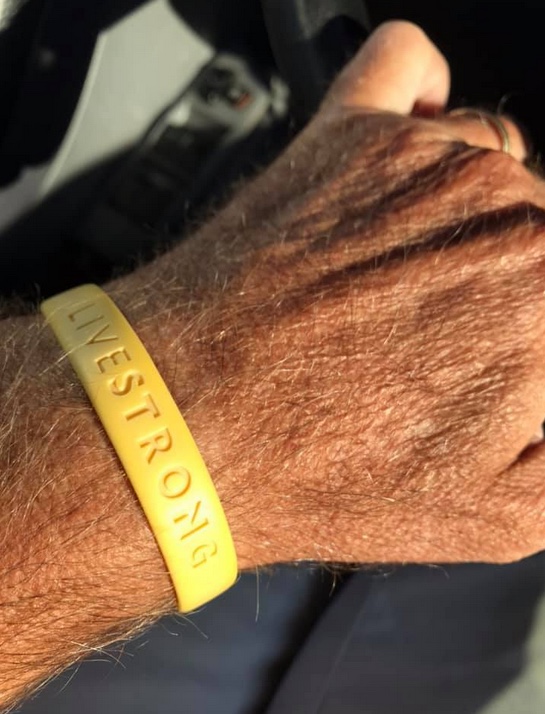 Those yellow bracelets. Launched in May 2004 as a fundraiser for the Lance Armstrong Foundation (Livestrong), they took the cycling world by storm. And indeed, a lot of the world. The majority of riders in the peloton in the 2004 Tour de France wore them.

It would be personal what the band meant to each wearer. Generally, it would mean, “I support people with cancer” or “Cancer research” or “Cancer awareness.”

I joined the masses and had one but wore it sporadically. But when I was diagnosed with cancer in 2009, I slipped it back on and wore it full-time, 24/7. Ironically, over the course of 11 years, the only time it wasn’t on my wrist was when I was fighting cancer. When I was being treated at Johns Hopkins I could not wear anything. Johns Hopkins had their own tubes and wrist bands for me.

I continued to wear mine. And at Ride the Rockies, where just one year earlier most riders would be wearing one, now they were much less popular. But Bob Roll was still wearing one and I commented to him about it. He said he would never remove his. By last year on the Tour de France broadcasts, I saw Bob was no longer wearing one. (And maybe earlier than that too.)

I posted to our group, Cyclists Combating Cancer. I asked them if they still wear them or when they stopped. Most (who responded) still wear them. But two answers stood out.

Peter Collins stopped wearing them as they broke. But he added that (cancer) “no longer defines me. I am always ware of it but it is no longer in the forefront of my life.”

And a couple feel like the organization is a fraud. Jerry Kelly summed it up:

Jerry alleged that the CEO (Doug Ulman) and the Board lied about what they were doing with donations.

I hold no animus towards Lance Armstrong. Only he knows in his heart what was behind the creation of the Lance Armstrong Foundation (the nickname became Livestrong and the organization later took that name, erasing Lance’s name from the organization). And only Lance knows what was behind the creation of the yellow bracelet. It was alleged that this was to take pressure off him for doping allegations. One great big yellow distraction.

In June 2016 I was in the audience at Ride the Rockies in Aspen as Lance addressed the crowd. Moderator, Ron Kiefel, was selecting people to ask questions. He just called on raised hands with no idea what the question would be. I was not picked.

I wanted to have everyone stand if they ever wore the Livestrong bracelet. And then have everyone remain standing if they were still wearing it. And then ask Lance to address all those people who just sat down.

I would like to know. And what does Lance think of those of us who still wear that yellow band?

I hate cancer. I wish I never had cancer. I am a survivor. But I will not let cancer define me. And after 11 years of wearing this, I began to think I was being defined by cancer. My grandchildren have never seen me without the yellow band.

Today was to be the Livestrong Challenge in Austin. It was changed to a virtual event. And when the event went virtual, my band just went virtual.

I support cancer research. I support Livestrong and a number of other cancer-fighting organizations. But it’s time to turn a new leaf. I will wear my virtual band. You just can’t see it.