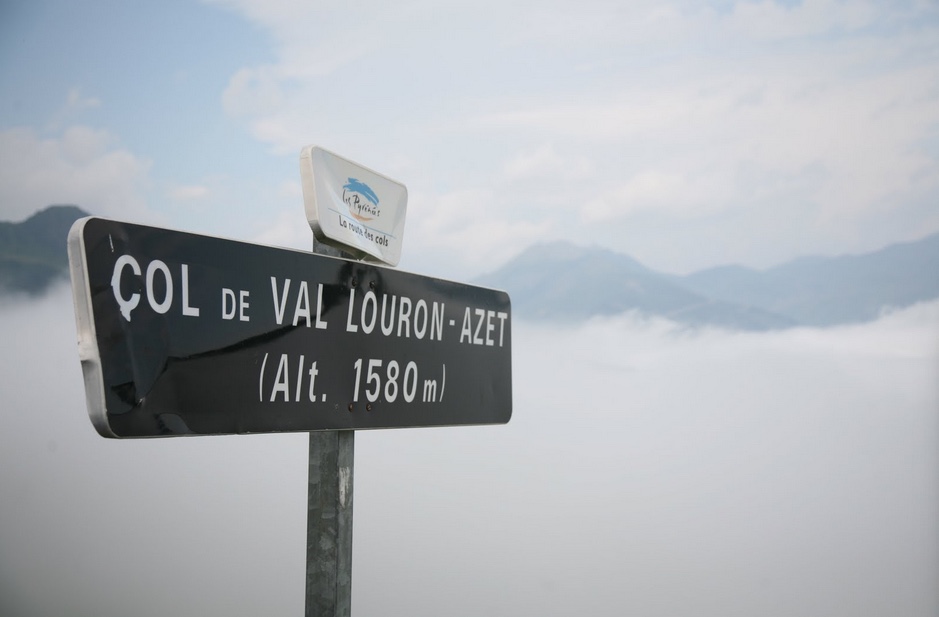 We woke up to a chilly overcast day. A pretty loud thunderstorm visited in the middle of the night and the low cloud cover was here to stay. Our Trek Travel group met and discussed riding options for the day. At breakfast, a number of people were already discussing taking a day off from riding. And why not? Because the Tour de France is having a rest day there was no viewing location to bike to.

We could climb the Col d’ Azet and Col d’ Peyresourde, eat lunch in Luchon, then return over the Peyresourde. Or skip the Azet and take a valley road leading right to the Peyresourde so only one climb would be needed. And Trek Travel would shuttle people back if you wanted to ride one-way.

By the time we realized we weren’t supposed to be following the other groups, that they were skipping the Azet, we had to turn around and go back to St. Lary to start our climb from there. These are called bonus miles. I love them! We added 14 bonus miles returning to St. Lary before beginning the climb up the Azet.

The mountains had a low cloud cover. The climb up the Col d’ Azet was almost seven miles. We went through a couple old and small villages past farms. We passed some big dogs and no dog yet has shown us any attention. No barking. No growling. No chasing.

At the summit the cover moved rapidly. When I arrived it was covered and I could barely see the sign at the summit 25 meters away. In seconds then entire mountain had cleared. And just as quickly, it disappeared again.

The top of the Azet is a pastoral grazing area and being France, I’m not sure if that means a number of monks are walking around or — yes, judging from the number of cow patties — it is a free-roaming area for cattle. We had to stop and pass carefully by two huge cows on our descent off Azet.

The descent, while obviously steep, was pretty cold. For each climb, it was strip down to as little as possible, sweat your ass off, even though the temperature was around 15°C (59° F), and then stop at the summit to put on as much gear as possible before the descent. Then freeze.

At the bottom of the descent, one comes to Loudenville. We went around a pretty lake and made our way over to the base of the climb of the Peyresourde. This climb was used yesterday in the Tour de France. It was hot, while cold, ascending. At the top was the Trek Travel van where I pulled over to refill my two bottles — both empty. Ate some pretzels, energy bars, and found the super-secret stash of Snickers. Mmm, Snickers.

Actually, the van had been at the top of Azet earlier but because of our bonus miles, we had missed it. But not now.

One of our riders had already decided to ride in the van and he lent his rain slicker to James for the descent. James had only a jersey and arm warmers. I had a jacket with removable sleeves which made it a vest. It rocked.

The descent off the Peyresourde to Luchon could have been great in good weather conditions. But the cloud cover was so thick we were getting soaked descending and were on the verge of hypothermia. This side of the mountain had straight roads but visibility was so bad, plus the roads were wet, one could not let go of the brakes. It was a shame. When you could see the line in the road change slightly you weren’t sure if it was merely a subtle change in the road or a nasty 180° hairpin curve. And I have yet to see a single sign in the Pyrenees warning of a curve ahead and a recommended safe speed to use.

We reached Luchon about the time most of our group was getting ready to roll out. They had just finished a big lunch and some had already called it quits for the day. The van was taking them back. I met our tour guide, Nicole Kimborowicz, plus Matt McDonald and Peter Pellicano who were going back over the Peyresourde. I didn’t want to abandon Rich and James but Rich had basically declared that, after lunch, he was taking a shuttle and James was unsure.

I didn’t want to eat lunch then have no one to bike back with and I was riding back. And I was afraid sitting outside I would get too cold.

So I skipped lunch and jumped in with the Nicole group. That was an excellent idea. The worse thing I could have done was to sit down, get something heavy in my stomach, get cold in my wet clothes, stiffen up, then attack the Peyresourde — the same HC climb the Tour used yesterday.

The same recipe followed — climb the Peyresourde, put on as many warm clothes for the descent, then let ‘er rip. Although not let it go too fast. It was just yesterday off the descent of the Peyresourde that Jens Voigt had his front tire blow out and he crashed hard.

Nicole and I rode together while Matt and Peter flew up the mountain. Nicole probably wanted to go with them but was a good trooper and stayed with me.

After our safe descent of the Peyresourde, my group didn’t want to return the route we came — up and over the Azet again. So we took the valley road back to Arreau and St. Lary. On our way into St. Lary, I went ahead solo through town and climbed partially back up the Azet to take pictures.

I finished the day with probably the most miles (74) and vertical feet of climbing (9600) of anyone in the group today. It was a great day on the bike.