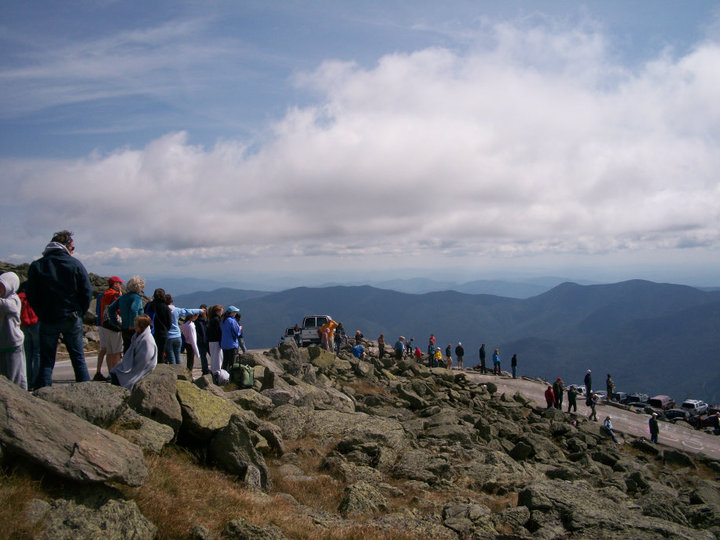 I forgot how friggin hard the mountain can be…

In 2008 we went back and I made it, albeit with a crash which meant I didn’t make it without stopping, and I was using normal stock gearing on my bike.

I decided I had to go back to make it without crashing or stopping and I would change the gearing. But May 2009, brought its own crash, a broken wrist, an e.Coli infection and a diagnosis of cancer. Yea, it sucked. Ultimately, I was able to ride but promised myself I would return in 2010 as my recovery goal.

And return I did.

I arrived on Friday morning. I wanted to do a light ride and rolled slowly through North Conway which was congested with tourist traffic. Near the end of town, a couple of riders asked “mind if we jump in?”

I was surprised to see Walker Savidge and Peter Salon, two riders for the Garmin-Transitions U23 team who had come to Mount Washington for the race. Of course, they were in their full Garmin kits. Made me glad I never bought the full Radio Shack kit to wear. I would have felt so stupid.

They didn’t know the roads so I agreed to take them on a short — 60-minute ride. What fun. I turned into the wind and pulled for five miles. We talked about their gearing, they hadn’t made any changes to their road gears — I knew it was too big for the mountain but hey, who am I to say something? It was one cool experience!

As far as the race, I came to the mountain without a ride down and was determined to find one on the race forum. I contacted Ted Essenfeld who agreed to give me a ride down. I met him at the registration area and sent a bag of warm clothes to the top in his SUV.

At the start line, I was soaking up the moment and ignored warming up, instead, I was walking around taking pictures. The ground was rocky and sandy but I was rejoicing being here and being a survivor.

Although there were four age groups, the largest group was the 45+ and it was so large it was split into two. So we had five starting groups, each separated by five minutes. I was in the last group and lined up at the end of our group. I started dead last.

When the cannon sounded I tried to clip in and found neither foot would clip in. Oh boy. The rocky and sandy ground got in my Speedplay cleats and prevented the springs in my cleats from working.

After 100 yards I got the left foot clipped in but couldn’t get the right clipped. It would be easier to pedal a bike with platform pedals and tennis shoes than my Speedplay pedals with road shoes that don’t clip in. When I stood to pedal my right foot would slip off the pedal. And bang my chin.

At Mile 5 I was catching a woman, Joan Pew from Maine, who asked if someone was running Speedplay shoes and wasn’t clipped in. You could hear it. Props to her to knowing what brand it was. She offered to take a brush from her bag if we both stopped. I knew we couldn’t get going again so I kept going. It was a kind offer though and greatly appreciated. I would ride it out and keep trying to clip in.

The ride up the mountain is 90-100 minutes of willpower. The body says to at least take a break. Indeed, I counted 31 riders who dismounted in front of me and were stopped or walking. One guy was carrying his bike up the mountain rather than ride.

I forgot how friggin hard the mountain is. I thought there would be some relief after two miles but there wasn’t. It keeps going up at that 12% grade with no breaks.

I crossed the finish line in 1:43 — just two minutes faster than last year. I thought I might have 10 minutes in me, i.e., finish around 1:35. I had ridden almost 3,000 miles this year and been “training” in France. But I’ll take any improvement. I came back cancer-free.

At the summit, I could not find Ted or his wife as she was forced to park in a service area about 200 yards from the top. So I never got into my warm, and dry, clothes. I was stuck in sweaty, nasty, cycling clothes. And a Polartec blanket. That was enough. I had to scrounge to find a ride for me and my bike. I accepted an offer from two different people – one to take my bike and one to drive me down.

I was pleased that I sent up my Trek Travel bag with shoes, warm clothing, food, cell phone (for photos). But with the missed connection at the top, it was all for naught. At the end of the day, I told Mary Power and Kelly Evans, event directors at the Mount Washington Auto Road, that I might not be back next year. Each year gave me a new reason to come back but this year left me fulfilled. Mostly. Oh well, I have six months to think about it (before registration).

NOTE: (1 Aug 2021) – Although Strava was founded in 2009, I certainly was not using it then. But an upload of my data show my point-to-point time was 1:42:15. This is different from the “official” race time which starts at the cannon blast but cannot account for the time waiting on the bridge, dead last, while the front row takes off. It is the best representation for comparison of me to me. This was my best time despite a cleat that would not clip in.