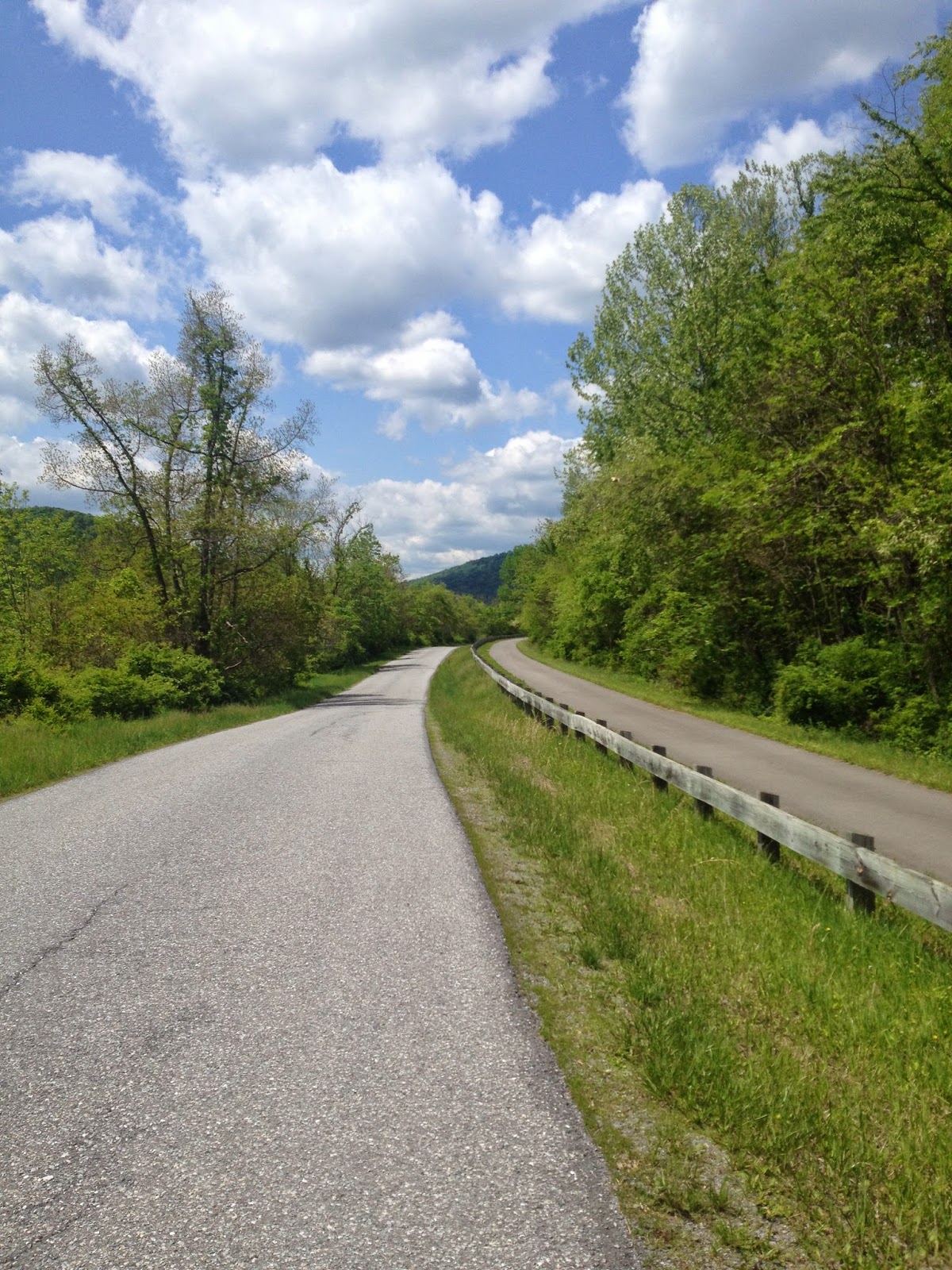 My planning was off this weekend. Yesterday I was planning a road ride and ended up on the trail – without my mountain bike. Today I planned to ride near Altoona but it was, well, cold. I mean late-winter type cold, low 40s around 10:00 a.m. I did not bring cold weather riding gear.

I drove through Portage to East Freedom, Pa, looking for new cycling roads and passed the first church my dad served as a pastor, in 1958. But it was still too cold to ride.

I drove towards Virginia then stopped in Hancock, Maryland. Andrew and I had ridden here before, probably around 2001 or 2002, but I knew there was a rail trail – the Western Maryland Rail Trail.

The trail is built on the former right of way of the Western Maryland Railway. It is a paved 23 mile trail. If one starts in Hancock, as I did, you are basically in the middle of it. It was a bit warmer in Hancock, mid 50s, but I still wore knee warmers and a jacket. I headed out a road which seemed to parallel the trail and followed it as long as it seemed reasonable. And once on the trail I found access to the road, or a different road, and rode it as well. The trail, at least the western portion, is in pretty good shape. The asphalt is in very good condition and there are minimal roots working their way up. I had remembered the eastern section being older and more rooted. But there were a number of small twigs on the path though. It was an out and back good for 25 miles. It wasn’t a high mileage day or any amount of climbing but was a good way to break up the ride back to Virginia. 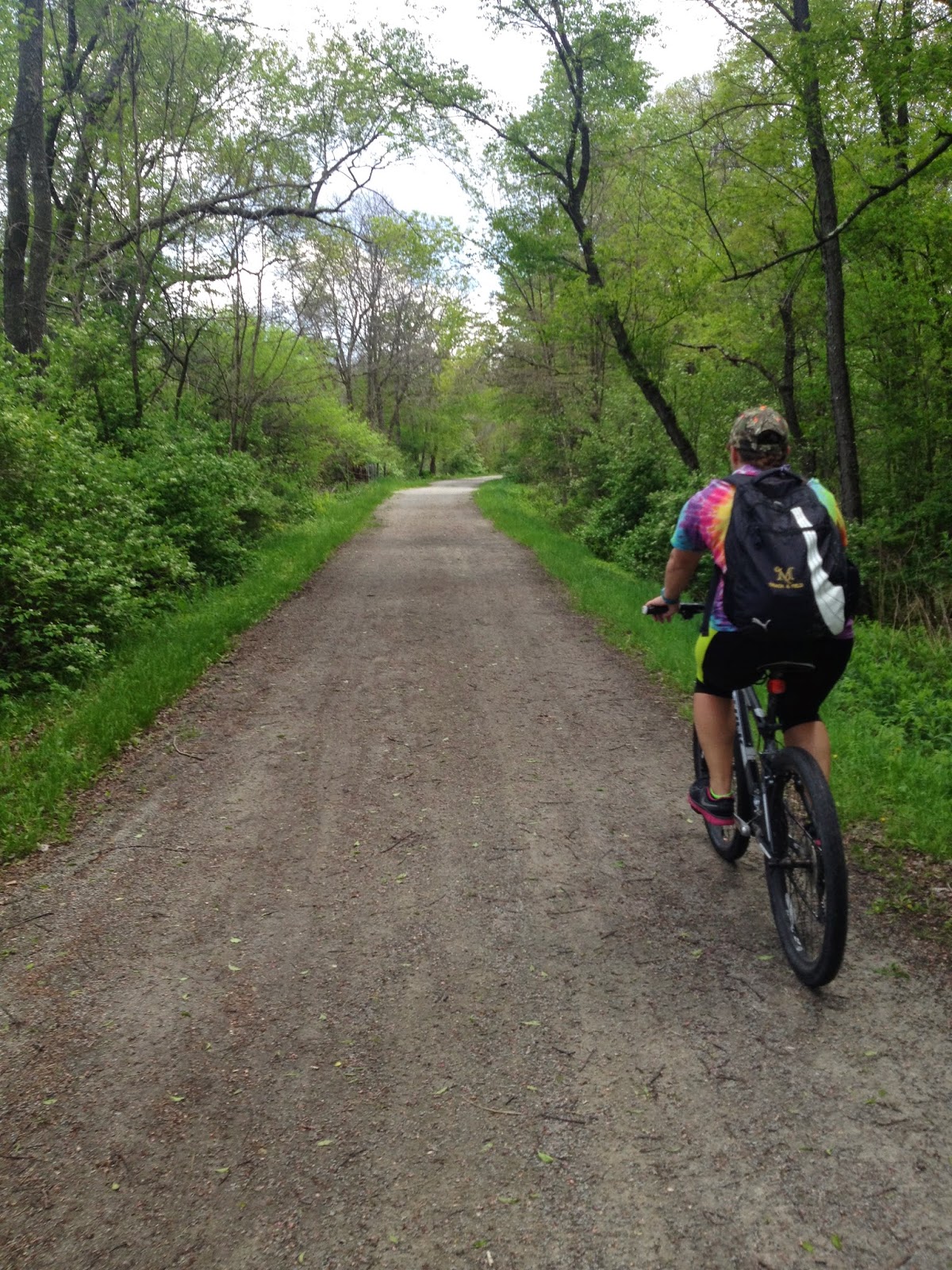 I love riding on the road. Occasionally I enjoy rail trails but especially if they are developed, i.e., paved.

Today I went to the Ghost Town Trail where I met my 4th cousin, Nicole Sokira. The GTT is a crushed limestone trail. I wasn’t prepared for riding on this trail – I only had my road bike with me. Nor was I prepared for the cold — high 40s and low 50s. On Wednesday my Garmin displayed 106.7º on the asphalt. The last time I rode the GTT was probably 14 years ago. Then it was open only from Dilltown to Nanty Glo. Andrew and I brought mountain bikes and enjoyed the trail. I tentatively made a plan to ride with Nicole to Vintondale and then jump on the road for a 42-mile trail/road loop. Instead, we enjoyed talking so much that I told her we would stay on the trail. And she had planned to go only go out 16 miles and I talked her into going to Dilltown. She had never been so this would be her personal best.

It was a gray day with a westerly wind. Even so, it was hard to miss the beauty of the trail. The Blacklick Creek was running strong pushed by all the recent rain in the area. Sounds of waterfalls and whitewater were everywhere. In the summer when the creek is running low it has a bright orange color from acid mine runoff. But today it looked as pretty as any pristine river running full.

On our way back as we reached Twin Rocks I jumped on the road back to Nanty Glo. It was good to put those road tires on pavement although there were two hills measured at 11%+ whereas the trail continued at 1%-2%. It was two miles on the road. It was chilly, overcast, and a bit breezy but it is a beautiful trail to ride. My preference is those 11% and 12% hills and the accompanying descents but the scenery was better on the trail. We joined back up in Nanty Glo and rode the trail the rest of the way back to Ebensburg. It was a good day. But next time I will bring fat tires. 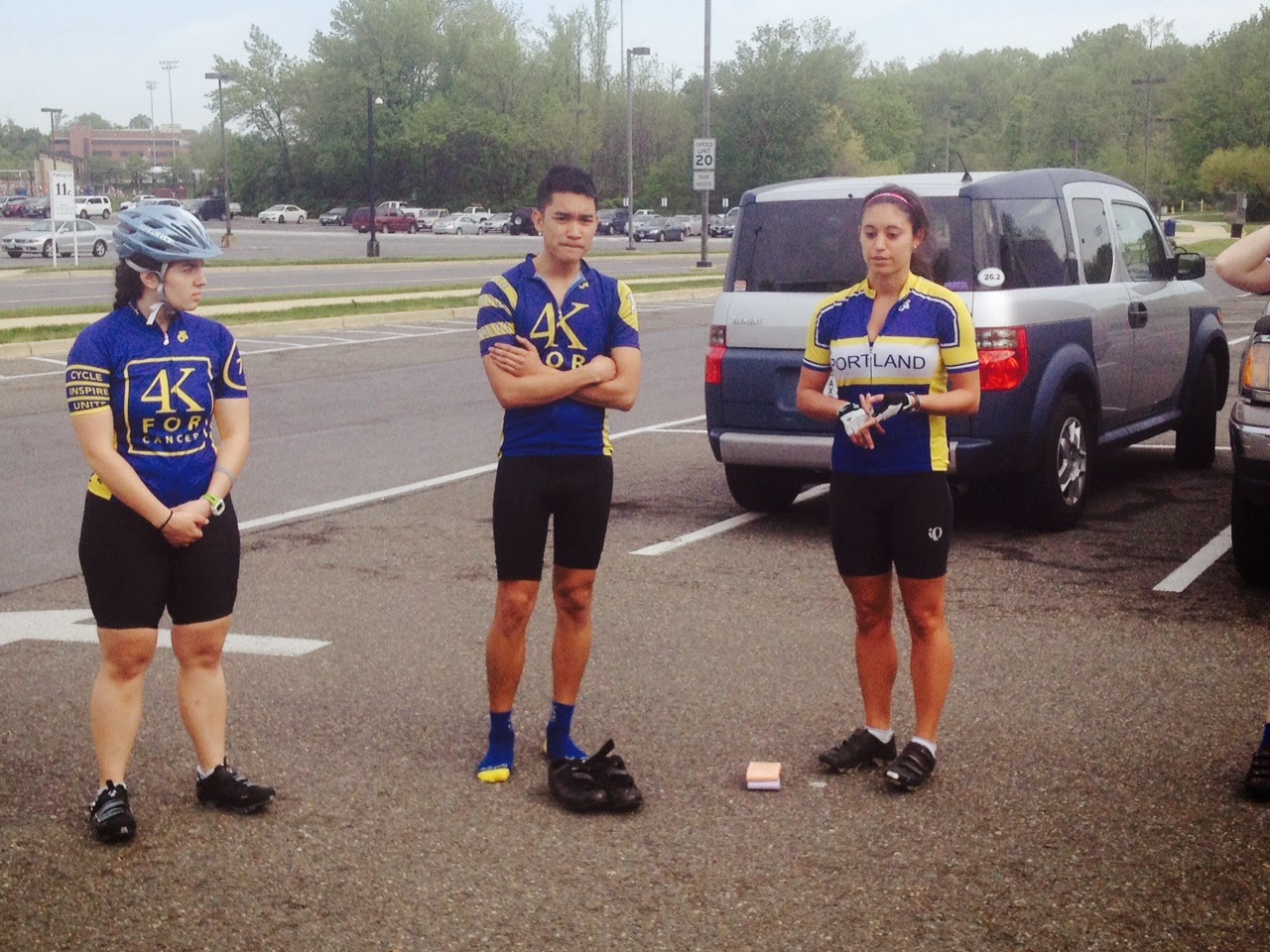 I was honored that Mary Natoli invited me on a training ride for the 4K for Cancer. The organization started at Johns Hopkins University as the Hopkins 4K but has gone through a couple of iterations of organizational ownership since its inception. I saw this as a way of giving back to the cancer-fighting community and enjoying a bike ride as well.

I left my house and was 10 miles up I-95 when I remembered that I forgot my Garmin. It was too late to go back. I didn’t know how I could ride without it. I don’t use it to know where I’m going but to see where I’ve been.* But when I don’t have it I feel empty.

Our instructions were to meet near Comcast Center on the campus of the University of Maryland. We counted off to form four groups. And whatever group I was supposed to be in changed by the time we hit the open road.

Mary stepped up and was leading the group. She had everyone form a circle and she went over rules of the road for the new cyclists. Then we had a dedication circle. I dedicated my ride to Joe Petrucelli.

Once we were on the road I formed up with Nick Lee, a friend of Mary’s from Baltimore, and Jen King, a senior at the University of Maryland who signed up to ride cross country with Bike and Build. We were the non-4K group. The Outcasts.

I’m not real sure what we were doing there. But with only three riders from the 2014 group, there would be more groups without a rider than with one. At least Nick and I, as experienced riders, could mentor Jen as much as she wanted mentoring.

We had a pleasant ride to Annapolis. Some busy roads – very busy. And one beautiful country road. It was partly sunny going out. Lunch was 4K-style; donated food, this time from Chipotle and Subway.

As we got underway to return from Annapolis, the weather turned for the worse. Hoping to beat the weather, our group was designated as Group 1. We would not honor that title. We knew we left before the support van and there wouldn’t be chalked turns but Nick was comfortable knowing the way. Until we missed a turn. It was raining and our focus was on staying upright.

We pulled over and tried to determine whether we needed to backtrack or continue with a new route to intersect the original route. We found a new way through. Our delay cost us but we caught one or two groups and picked up Anthony Venida, my “Pedal Pal” from last year’s 4K. We rolled ahead sure that we could see the now-first group ahead.

And then we lost them. We had missed another turn.

Jen, Nick, and Anthony all went to their phones to check the directions vs. maps on the phone. We continued ahead adding four more miles. A check of the map after the ride showed we could have gone back 1/4 mile and been back on course.

But this was an adventure as much as a ride. We found our way back on course although we finished last. In the last 16 miles, we ran into more rain and wind. But we stuck together to bring everyone home safely. I think everyone had a good day. I did.

It was to be a training day for this year’s for 4K. And that was an organizational failure. Only three new riders showed up but they got a taste of the 4K. The riders are all tremendous. Mary, an alum, organized the ride and so many others were willing to come out to help. Best of luck and safe travels to this year’s 4K riders!

___
*The map was drawn after the fact and is not from my Garmin – which still sets on the fireplace.