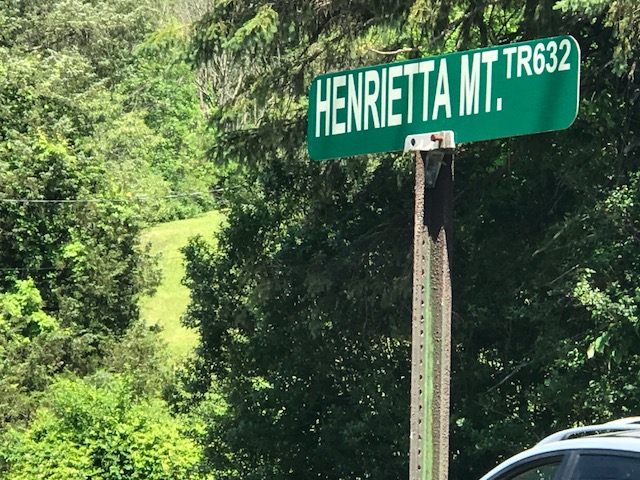 Probably eight years ago I asked some riders from Altoona what the hardest climb in the area was. I was thinking Blue Knob or Horseshoe Curve. One rider told me to find Henrietta Mountain Road. And today I did.

This was was tough. Although it wasn’t too long, just two miles. It’s always hard to compare climbs but I can compare it to some other two mile climbs or sections I have done.

I started my ride in Hopewell (Bedford Co.) on the H&BT rail trail. More on that later.

At Saxton I found the infamous Henrietta Mountain Road. I did no research and instead, just rode. It seemed to kick up to 7-8% right away. But after a quarter-mile just past an intersection, the real climb began.

It seemed to kick to 12% then went even higher. I have no real pictures because I wasn’t stopping although my body wanted me to. The road was winding but with only one sharp turn I hesitate to call a switchback. It was heavily wooded on both sides. It was beautiful. But it offered no panoramic views because it was so wooded.

I tried to not look up the road because every time I did I could see it was going higher. After two miles, although I had no idea at the time, I could see the top. And here I made a mistake by not researching the climb. I assumed the road went over the top and down the other side. So I simply turned around.

The descent back was steep. Rough pavement. And windy if not sharp turns. It wasn’t fun. I couldn’t let the bike roll. What I learned after the fact was I should have kept going. I could have gone another 3-4 miles where I would have joined Rte 164 coming out of Martinsburg. Then It looks like a straight descent back to Saxton. In other words, a fun descent. Oh well, next time.

I rode back to Hopewell and explored the trail a little more. At Hopewell going north for two miles, the trail is crushed limestone in great shape. A road bike is fine although I wouldn’t want to ride 20 miles on this.

Going south the trail was a road. A gravel road that led to a camping area. That was harder on the bike. I rode a couple of miles then decided I had had enough. Wrong bike for this surface.

The signature landmark on the trail seemed to be the trestle over the Juniata River. I had decided the surface wasn’t right to pedal to it.

The trail head seemed to be on my way back to Somerset where I was headed. So I drove to Cypher to bike that section.

I don’t know if it was good or bad but the trestle was probably no more than a quarter mile away. But it was gorgeous. Maybe even more gorgeous was the cut in the hillside. The trail here was crushed limestone, again.

It’s a beautiful trail. If there wasn’t the section by the recreational area which was a gravel road, I’d have no problem recommending a road bike for the surface. But this trail needs wide tires. I may ride this on a mountain bike.

One Reply to “A Mountain and a Rail Trail”