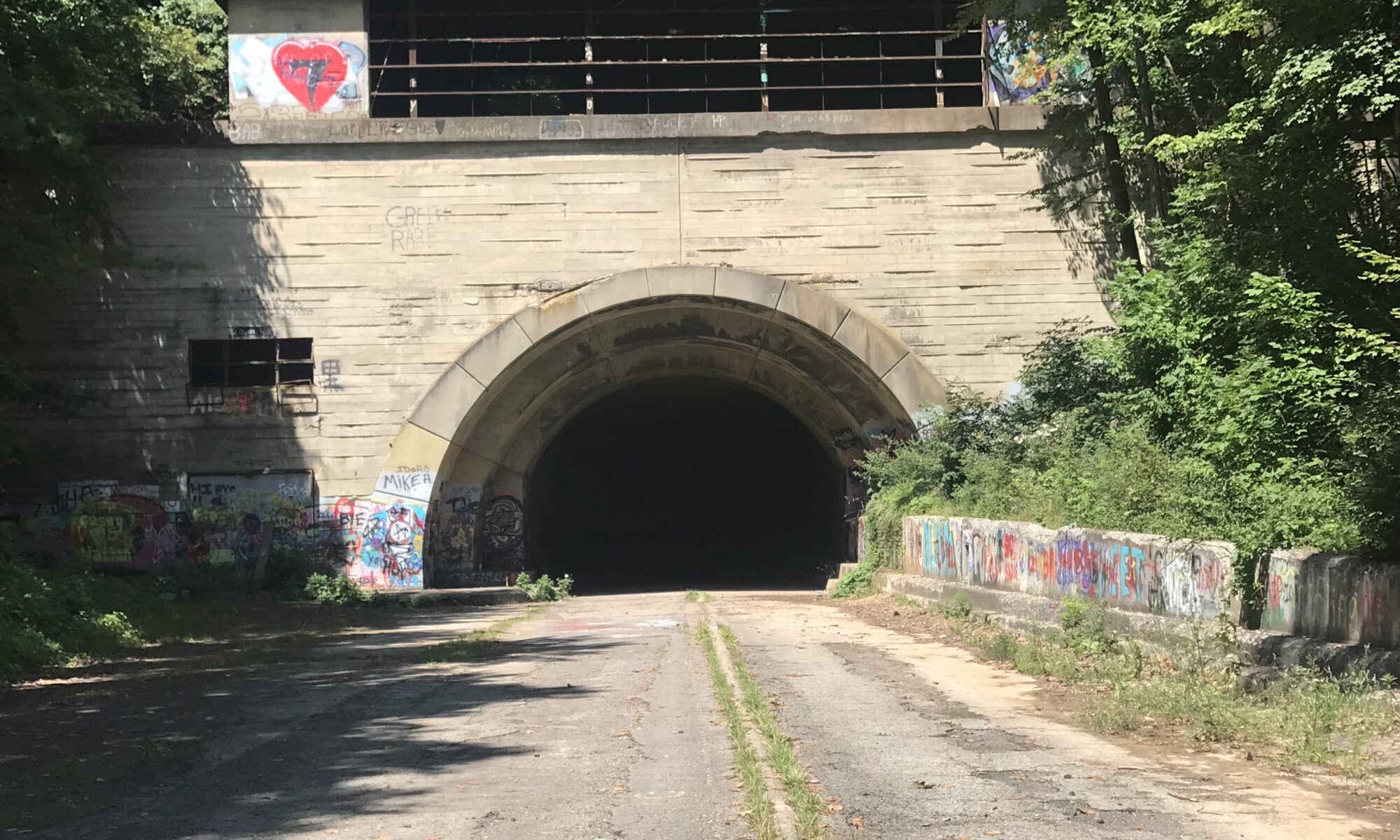 We left Woodbridge at 6:30 and drove out I-66, stopping in Linden at the Apple House Restaurant for some apple butter cinnamon donuts. We arrived in Breezewood at 10:00 a.m.

The entrance to the Abandoned Turnpike used to be a dirt singletrack. I was never able to ride up the pitch and only once dared to ride down it. Today I noticed that it had been widened and paved with some asphalt. Both Tim and I were able to ride up the path to the beginning of the trail.

There was a gate across the road and the jersey barriers were arranged that one could not take a bike. We had to do the Limbo, ducking under the bar with our bikes.

We were only in about a mile when we passed two guys coming back. One was riding slowly and the other was pushing his bike as his had a flat. I offered any help and was willing to give him a tube but he said he would walk. They were almost back to the cars.

I mentioned to Tim that there is a lot of broken glass here and to always be vigilant. We rode our Trek Checkpoints with knobby tires so I was feeling pretty secure. I also thought that the turnpike looked like it had been swept at some point. Although there was broken glass, it wasn’t nearly as bad as it had been.

I talked to a family from Carlisle at the entrance to the first tunnel and Tim went ahead without me. Brave guy. In the tunnel I hit something, probably falling cement from the ceiling.

The distance, end to end, is just 8.5 miles so an out-and-back ride is just 17 miles. That seemed too short of a ride. So I added a valley loop and created two KOM segments on Strava that I could compete for. Tim could too but having never ridden this before Strava would not show his first effort as a PR.

I went ahead on Hess Road and captured both KOMs. I consider these as garbage KOMs. First, is because very few people ride here. Second, no one knew these were segments before I created them. But I have ridden here before and would be happy with PRs. But they were KOMs and I will take them.

We finished the loop and headed back inside the tunnels. As I came out of the second tunnel I could feel some squishiness in my front tire. I looked and told Tim that I was flatting and was going to ride ahead.

With less than two miles to go, I had hoped to ride as far as I could before it was unrideable. Being so close I didn’t want to take the time to change the flat thinking it would be faster to ride than perhaps walking. And walk I did.

Although I blamed glass, I think it was just as likely broken asphalt or broken concrete inside the tunnel. I found no debris in the tire.