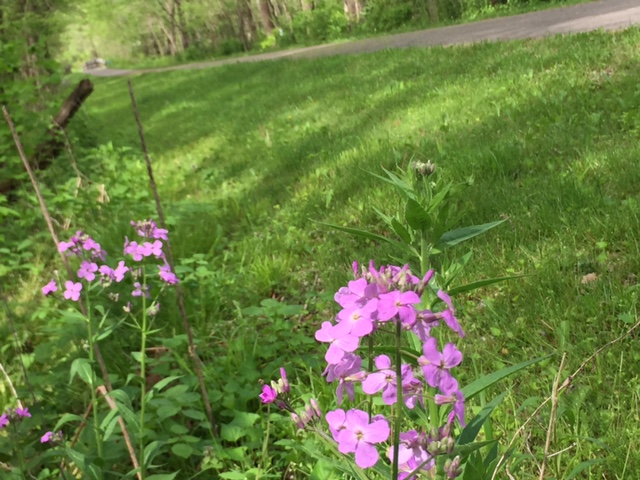 I left this morning for Pennsylvania with another bad weather forecast but surprisingly, as I passed Springfield, it was dry but mostly sunny. The weather forecast was showing a couple of hours with only a 15% chance of rain. I parked at Beatty Station just south of I-70 in Springfield. It was 9:00. I met a guy named Dave getting his bike out. We chatted briefly. He told me he was waiting for his group. They would ride to Yellow Springs and back. He also volunteered that I might see them on the trail. I headed north to Springfield. I wanted to see how far the trail would go. No far, I learned. When it became a signed road route I decided to turn around and ride south. I passed Dave and his cycling friends still getting ready. The trail here is wooded. There are few intersections and just a straight wooded trail. Very pretty. In this section , unlike the southern section, it does not follow the Little Miami River. Five miles in a came to Yellow Springs. My impression was this was a Bohemiam community. The downtown had neat buildings including a lot of art shops. I continued on the trail. I went under a pretty neat covered bridge. The smell of lilacs permeated the woods. I arrived in Xenia then turn around. Or maybe the outskirts of Xenia. But I wanted to get back to Pennsylvania and this was far enough. In Yellow Springs I caught the cycling club. I had gone to Xenia. They had gone to Yellow Springs, one third of the distance I had ridden. I saw Dave again and then made my way through the group and eventually back to the car. This trail is the third longest paved trail in the U.S. at almost 80 miles. It would be fun to come back and ride the entire route.