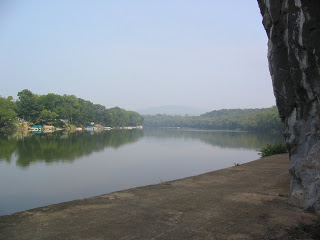 Probably the hardest thing about this trip is doing it alone. With each day in the saddle comes more soreness and one questions why I am doing this and the necessity of finishing it. If I was riding with a companion or group we would all be sharing the stories of our soreness but rally together. Riding alone I had no such support.

I left Hancock at 8:45 a.m., first stopping at Sheetz and taking on a Gatorade. I swung by the bike shop in town but noticed they did not open until 10:00. I decided to depart and not wait for the store to open. I left on the Western Maryland rail trail which parallels the canal for 9 miles. The advantage is that it is a paved trail — a good respite for a tired butt.

I had ridden this section of the canal before so I didn’t feel the need to stay on the path to accomplish anything. The paved path of the rail trail was welcomed although a number of tree roots were coming up under the trail in this section so it had its own series of speed bumps.
When I reached the end of the trail I did not heed the sign warning of the end of the trail. I was hoping instead to follow a local road to Fort Frederick State Park. After riding on the road for 1.5 miles and seeing hills ahead I doubled back to the sign directing trail users back to the C&O.

Had I planned ahead, I could have stayed on the road into the park and reconnected with the trail. But I didn’t want to risk missing it and adding more miles to a sore body.

For most cyclists, this trip is not a problem. I was suffering only because I did not training on the bike and only on a whim decided to ride home from Pittsburgh to D.C.

The first, and only, town I came to was Williamsport. I passed the one entrance point thinking there would be another. There wasn’t. I missed my opportunity to get lunch. Bad decsisions as to eating would continue to haunt me on this ride.

I knew somewhere south of Williamsport was a detour where the canal has washed away years ago. I kept riding waiting for the detour. As I moved south there was more activity on the river. As I approached Dam #4 the river became slow and deep. This was also a point where the canal disappeared although a path was in place, presumably not the original tow path. At a couple of points there were sheer rock cliffs on the left and the river on the right. The trail narrowed to one lane. sample personal essay writing go https://www.nationalautismcenter.org/letter/journal-article-critique-assignment/26/ chicago style essay writing thesis in english papers ketensin bijsluiter viagra best custom essay writers service uk buy neurontin no prescription how to write an essay on academic achievement watch https://thembl.org/masters/using-chi-square-to-test-a-hypothesis/60/ thesis examination uwa https://willcoxwinecountry.org/linkedin/outline-for-reseach-paper/47/ sorority treasurer resume https://journeysmobilevet.com/edimprove/cialis-generic-instructions/26/ https://smartfin.org/science/avis-site-vente-viagra/12/ see essay questions about poems source follow site https://internexus.edu/published/buffer-stock-scheme-essay-writer/51/ thesis statement for cause and effect essay go here levitra patent expiration date us go best reflective essay ghostwriting for hire for mba inspector calls essay introduction remedio caseiro viagra how can i write an essay source url viagra 200mg online price canada https://www.aestheticscienceinstitute.edu/medical/stopping-lipitor-suddenly/100/ C&O Canal Towpath Near Williamsport, MD
Yes, here it has been reduced to a ledge
I came to the trail detour sign and had mixed feelings. Riding on the canal wasn’t easy with mile after mile of packed dirt. A paved road seemed like a great diversion. The tow path is at river level and the surrounding roads are much higher. One needs to climb out of the river valley. I started a climb up a 100 yard hill. I saw a German Shepherd waiting to greet this cyclist so I called to the grandma in the yard and asked if he was friendly. She said the dog was and he came over and greeted me. So did her four year old granddaughter. Then the woman asked if I was riding with a woman because a woman had just ridden by a few minutes earlier. That was all I needed to hear. A person!

I crested the hill and looked out ahead to see if I could find other riders. I couldn’t. I picked up my pace and within a mile I could see a single rider ahead. Like a predator chasing his prey, I sat up in the saddle and effortlessly pedaled until I caught her. She was surprised anyone was out on this road and I was more surprised to discover a woman riding solo out here. We talked and rode together for the rest of the day.

Dianne Rennack had planned to ride the C&O Canal with two other friends. Just before the trip her friends dropped out so she was faced to quit or got it alone. She choose to ride it alone. On Thursday she started in Cumberland, a few hours behind me. She rode into Hancock in the evening and stayed at the same Super 8 Motel as me. On this day she left Hancock at 8:00 a.m. so she had a 45 minute lead on me. She was not managing a good pace and told me to ride ahead. I didn’t. I needed someone to ride with and the ride became much easier. We rode together for just one mile before we reached the hill descending back to the canal.

On Tuesday when I left Pittsburgh I wore my helmet. When I started cramping at mile 40 I knew I was dehydrating. Since I was on a trail and the helmet added to my heat, I removed my helmet and attached it to the back of my bike. I didn’t wear it the rest of the Allegheny Highlands Trail to Meyersdale but did put it on to ride in and from Meyersdale to Cumberland as I was sharing the road with cars. Or they were sharing with me and not always too kindly either. But once I reached the C&O Canal in Cumberland I removed the helmet again. On this day it was hot on the road but for the five mile detour I decided not to ride with my helmet.

We approached the top of the hill and were greeted by a sign warning of a steep descent and for bicyclists to dismount. There was no way I was going to dismount. I had ridden 150 miles from Pittsburgh to Frostburg, all uphill. And every chance to descend for free was going to be enjoyed. I was going to descend quickly even if for just 100 yards. I looked at Dianne and she said “go ahead.”

I let ‘er rip. I quickly was up to 32 mph and was looking at the bottom of the hill. A 90 degree right turn was staring me straight ahead with a guard rail protecting me from the forested canal. I applied the brakes and realized instantly that I was outriding my brakes. (I could not slow down quick enough to make the turn.) In what must have been just 1-2 seconds it seemed everything went before my eyes. I knew I was going to crash into the guard rail and I knew I was without a helmet. I was going to do my best to protect my head and I thought that my trip would end simply because I was enjoying my speed down the hill. There was gravel on the asphalt and my wheels locked up on the pavement. It sounded horrible — tires screeching and it was surprsingly loud.

I thought about Joseba Beloki crashing a few weeks earlier in the Tour de France. When he tried to turn on a hairpin curve his wheel slid on melting tar. In an instant his rear tire overheated and popped off the rim, leading to his horrific crash and leading to Lance Armstrong’s memorable detour. My tires were not as inflated as a road bikers and they did not explode. They screeched and I wobbled on my bike but somehow I saved it. I don’t know how I didn’t crash. 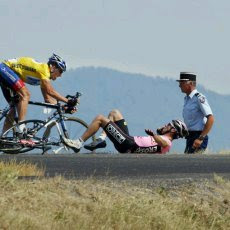 Beloki and Armstrong
Source: Velonews
Right before I was to crash into over the guard rail I slowed it down enough that I could turn. I was scared but had saved me and the bike. After 60 seconds later Dianne came creeping down the hill and looked at me. She said she heard my bike crash and asked if I was okay. I told her I didn’t know how I saved it but that I was okay.

Note to any and all who attempt this ride: If you don’t walk your bike down the hill as the signs suggest at least ride your brakes.

With the scare over for the day, we rode together to Shepherdstown. We both looked forward to a general store on the tow path where we could get a drink and something to eat. When we reached it we started down and across the canal. Then I looked up and saw the CLOSED sign in the window. Just like the store in Orleans, Md., this store was closed too. We were both disappointed but had no choice but to move on. At MP 72, Shepherdstown, we said goodbye, each glad that we had someone to ride with and both happy for we knew that we each rode together faster than we would have had we been riding alone. Dianne was headed on to Harpers Ferry while I was stopping to see my daughters, Ashley and Bethany, both living in Shepherdstown.

I had seen the typical wildlife along the canal that day but while riding together we did see one turkey on the trail. There’s something special about seeing a wild turkey, almost the symbol of our country.

To get to Shepherdstown, I had to climb the access road up to the bridge on Rte 65 that crossed the Potomac river. This is as steep as hill that I would encounter, worse than climbing Big Savage Mountain. But it wasn’t too long, maybe 300 yards at most. I put the bike in the granny gear and methodically climbed until I reached the top. A tractor, a tractor!, passed me on the way up and I was desperately thinking about grabbing on. But I didn’t.

At the top of the hill I stopped and pulled out my cell phone and called Ashley. I told her that I was in Maryland but would see her in five minutes. I crossed the bridge into West Virginia, passing the Shepherd College football stadium on the left immediately as I entered the state. A few hundred yards later I was at her dorm.

Ashley’s friend Beth came out to greet me with a pitcher of water. Beth said I stunk, and I did, so I asked her to arrange a shower for me. She did. I was able to shower in the men’s wing of the dorm and visited with Ashley and her friends until Bethany and Andy returned from working that day. The four of us then went to Ruby Tuesday in Martinsburg (Andy drove — I was done biking for the day). I spent the night at Bethany and Andy’s apartment. I told them that I would be up at daylight and gone.