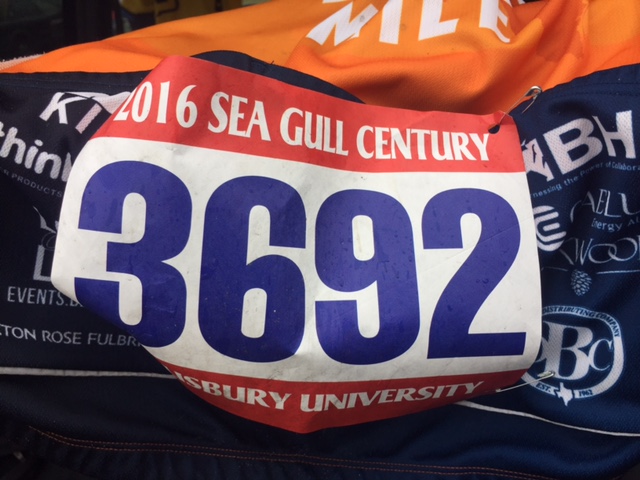 Last year flooded roadways and more rain from Hurricane Joaquin forced Salisbury University to cancel the Sea Gull Century. It was the first time in 27 years the event was canceled.

Just days before this event it looked like this one might be canceled as well. Hurricane Matthew was coming up the east coast. The forecast today did not look good with the hourly forecast showing a 50-60% chance of rain. But I would ride come hell or high water. Well, maybe only hell.

A group from Virginia Beach went by and we jump on their train. With others. We followed them to the first aid station. We stopped, very briefly, not to use the facilities but to rest and stretch. (Well, not me.) Pat said their strategy was to catch a ride behind some tandems. And we did for a while.

At Mile 40 we came to railroad tracks which were at an angle. No fewer than five volunteers were warning riders that other cyclists had been crashing here when, just then, a cyclist went down hard on the tracks. Ouch! Message received. (We all navigated the tracks safely.)

Just after the tracks at Newark was the second aid station. Slight fail on the organization’s part here. No food. The line for water and Gatorade snaked out to the road but many people, me included, were in line for food. This should have been marked as a water stop. I wasn’t disappointed there was no food, only that it wasn’t advertised that way. I could have skipped standing in line to top of my water bottle. Oh well, they got everything else right.

After that stop we rolled ahead to Assateague. Just before crossing the bridge to the island the ladies went to the visitors center looking for cleaner rest room than the porta johns ahead. I suspect they were successful.

The bridge to the island was a humpback bridge with a bike/pedestrian bridge beside it. Bikes had the bike bridge going in to the park while coming out traffic was alternated into one lane allowing cyclists to have a dedicated traffic lane.

The aid station at Assateague Island was well stocked with food. And water. And Gatorade. We had grey skies and occasional “spitting” of rain but no rain to speak of. The roads were a bit damp but it wasn’t raining. I checked my phone for weather and saw there was rain everywhere around us. It looked like we would get soaked going back.

The one picture I wanted on the day was a horse. A wild horse. My phone wasn’t cooperating too much (battery) but I managed one. Or two. But missed the one I really wanted.

We left the island and motored on home. The tail wind we were hoping for never materialized. Aurora had a flat tire (squishy really which was dragging her down), so we did an 8-10 minute stop to get her back on the road.

Approaching the finish, it appeared we would be two miles short of a century. We unanimously agreed that this would not be acceptable (I like these people). We turned on Division Street and rode one mile out of town before returning to the route.

The finish line was pretty cool. There is a pedestrian underpass under US 13. We were directed through the tunnel to the other side of the street at the finish line.

In the end, it really was a good day on the bike. The weather cooperated (the rain started only when I reached my car) and I had good riding partners. I went into this ride thinking one-and-done but now think I would do it again. It was good fun.