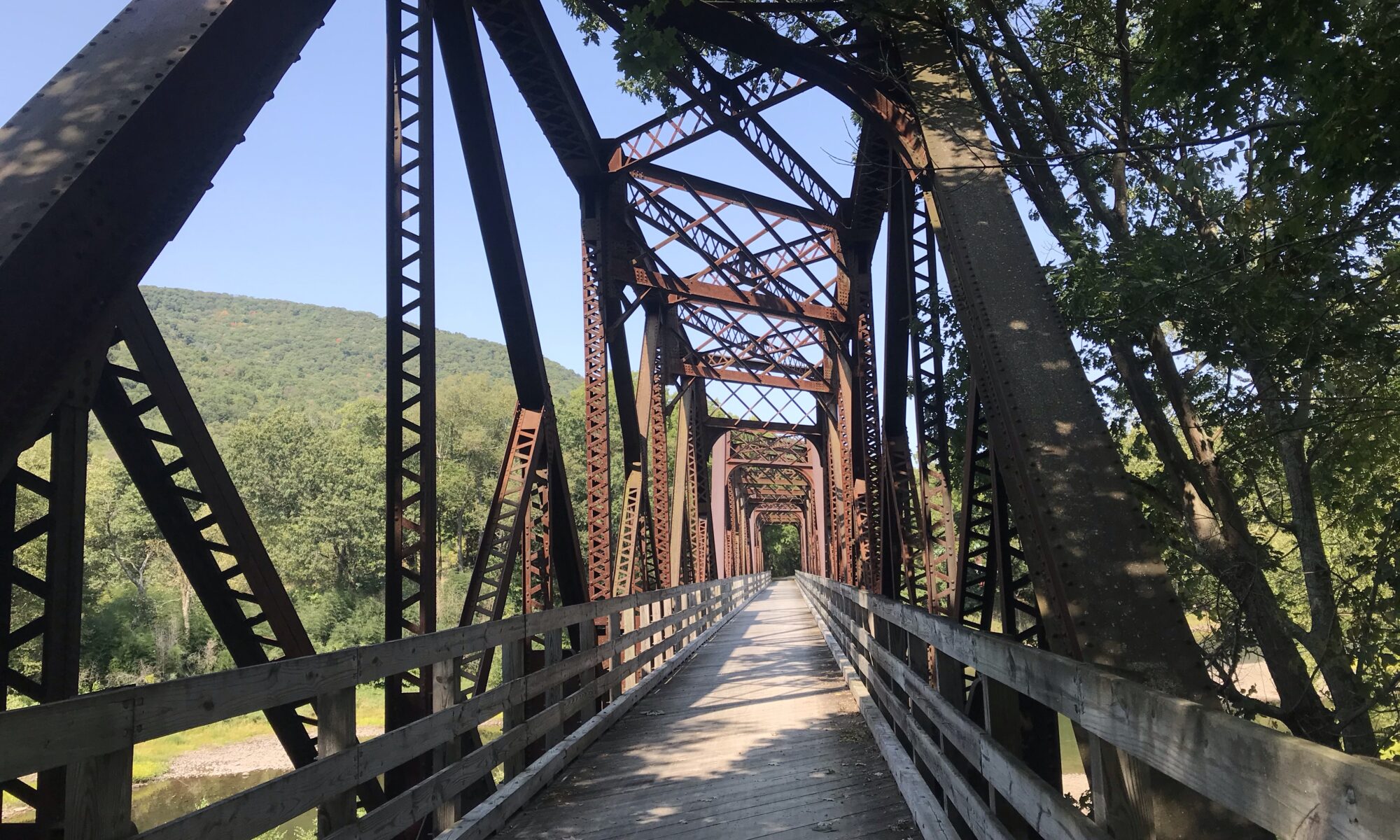 I read about this “destination” trail in Pennsylvania called the Pine Creek Trail. It is a 62-mile rail trail that runs between Wellsboro and Jersey Shore.

I love the open road. I don’t like traffic. There must be a happy balance between the two. Rail trails are especially nice if they are paved. Most are not. And this trail had a crushed limestone surface.

Most riders choose a hybrid bike to ride this trail. I chose my Trek Checkpoint, a gravel bike. I used road tires, 32 cc width. I think 25 cc would be ok too although 28 cc would be better. I do have 40 cc gravel tires with small knobby tread but decided that would be overkill for this trail. The 32s were fine.

And I was right. Especially near the Wellsboro and Jersey Shore trailheads, the path is packed down pretty solid. In the middle, I found a bit more loose gravel but it was no problem for my road tires.

The literature often suggests that the trail runs downhill from Wellsboro to Jersey Shore. I’ve seen estimates as much as a 2% grade. I call nonsense. Let’s resort for a minute to facts.

The elevation change over 62 miles is only 702 feet. That computes to 0.2% grade. Or for those who claim it’s one percent downhill, they have overstated the grade by fivefold. For this cyclist this trail is flat. But I didn’t know that before riding.

I wanted to ride the entire trail. Ideally, I could ride 62 miles and meet my ride. That wasn’t an option because I was riding solo. Actually, it could have been an option had I researched this because there is an outfitter in Wellsboro that will drive your car to Jersey Shore for $120.

My options for riding the entire length would be: (1) ride 128 miles in one day; (2) Ride from one city to the other, overnight, then ride back the next day; or (3) ride out and back on two days to cover the distance.

I thought I might not have enough daylight or energy for the first option. In retrospect, I would have. I did not like the lodging choices for the second option plus I did not want to carry extra gear with me to overnight. So that left me with the third option.

I decided on staying in Williamsport as they had many good lodging options. I left home early yesterday morning and arrived in Jersey Shore at 1:00 p.m. I would ride half the trail today and half tomorrow.

Based on the erroneous claims that the trail is uphill to Wellsboro, I wanted to start in Jersey Shore and ride uphill so I would have the downhill on my return. Of course, I would soon learn that the trail is flat.

I decided to ride for two hours then turn around. I would return around 5:00 p.m. which was a good day.

I parked next to a trailhead in Jersey Shore although I don’t think this is part of the trail. I think it is a one-mile access trail to reach the actual trailhead.

Once on the gravel trail, I had gone seven miles just south of Waterville. I came upon a woman on her bike and her adult son running. Except they were stopped and pointing in the woods. And there was a black bear. My day was made. My ride was made.

There are a lot of at grade road crossings. Although most are small roads that lead to cottages the trail does cross Pa. Rte 44 and 414 a few times as well. At each of these crossings, there were usually two gates to navigate. I soon discovered that rather than try to see how to get around the gates it was easier to see where the worn trail led. I thought that getting through these gates would slow my average more than riding on gravel.

There were three trestles in this section and I rode to the Black Walnut Bottom parking area (MP 37). I chose to ride for two hours then find the next or closest parking area where I would start today. So this was perfect. It looked like I had ridden 25 miles and averaged 12.5 mph – which is what I planned for a gravel trail.

I had stopped a lot for photos. And bears. So my moving average was certainly faster. When I turned around I felt dirty. Grit all over. The bike was dirty. I was dirty. And I saw the road beside the trail. I hadn’t studied the route ahead of time but felt the road would take me back to Jersey Shore.

I could not check my phone for a map. The Pine Creek Trail is in the Pine Creek Gorge which is more commonly known as the Grand Canyon of Pennsylvania. There is no cell service deep in this canyon. So I jumped on the road to see where it would take me.

Some of the time the road was pancake flat and stayed next to the trail. Other times it climbed high. It gave me views high above the trail that I would not otherwise see. But I was still in the canyon. I did not climb out of the canyon. To see the canyon from the top I would have to leave and go to one of the vantage points. That would not happen on this trip.

My return trip went much faster. Part of it was because I didn’t stop as much for photos. But part was because I was on the road. When I checked my data at the end of the ride I had averaged 15.5 mph. I was shocked because I expected 12-13 mph since I was on a gravel trail, at least for half the time.

Today’s ride would be a little more complicated. I did not want to simply do an out and back starting at MP 37 (Black Walnut Bottom) which is where I stopped yesterday. I had studied one alternative route back by road.

It was 50° when I rolled out at 9:30 a.m. Deep in the canyon the sunshine doesn’t reach some of the deeper parts until later. It would be one hour until I saw anyone on the trail. They were all keeping warm.

I just rode. At Blackwell, a group of eight cyclists was just ahead. I recognized the 2016 Ride the Rockies jersey on one of them. Another referred to me as a serious cyclist. I guess I was because I would pass them and they would be out of sight 30 seconds later.

I’ve read other accounts about this trail and how to get to the nearby waterfalls. I just rode. My road cycling shoes are not that good for hiking and I don’t really see me switching pedals and shoes for this bike. It’s a gravel bike but it’s primarily my second road bike. I’ll probably never have cycling/hiking shoes unless I put platform pedals on this bike.

I reached the end of the trail near Wellsboro (three miles away) and decided to execute my road plan of returning. I knew I would be riding more than 70 miles and only had two bottles with me, one banana, and one pack of Skratch energy chews. I should have stopped in Wellsboro for something to eat.

One reason I did not was because of restrictions in place due to COVID-19. I didn’t go for a bike ride with a mask. Maybe a store or restaurant would have had a mask for me or wouldn’t care, but I just didn’t want the hassle.

And I really wanted to keep riding. And so I did. This little city is quite beautiful. I had a 2.5-mile climb leaving Wellsboro and then a sweet 10-mile descent to Morris. There I picked up Rte 414 and had another five miles before meeting up with the Pine Creek Trail again. Although when I did I would stay on the road.

I arrived back to the car having ridden 71 miles (the road loop was shorter). My average, like yesterday, was 15.5 mph. The surface is generally pretty hard. Having ridden it once I now know I could have averaged 15 mph and done an out and back for the entire length in 9-10 hours. But for that, I would stop for lunch.